Whether it is the 1998 version or the 2011 version, Hunter x Hunter remains just as exciting. Yoshihiro Togashi’s unique way of building his characters brings us in a state of conflicted morals. His characters are twisted yet we cannot help but love them. Be it the protagonist Gon and Killua or the antagonist Hisoka and Illume, he always makes sure to leave us thinking about them. The genius manga’s most controversial character, Hisoka Morrow is one of the most twisted characters to have ever been created. There are many things that can be rated as the worst things done by Hisoka. The character has been built from the roots of complete evil yet so much fun that it has become difficult to hate him.

Hisoka is a selfish, sadistic, and creepy antagonist. Though my view might not settle with many, I still absolutely love the character. To be more accurate, Hisoka poses as a character that fans love to hate. While what he does completely ticks them off, he keeps making the plot more interesting. Hisoka was never a character made for the sake of being looked up to. Togashi intended to create an antagonist that stands out as horrible and disgusting. The way his evil has been portrayed is Togashi’s genius on a whole other level. One can hate Hisoka but at the same time accept that he gives Hunter x Hunter an amusing turn.

Hisoka has done horrible things throughout the Hunter x Hunter storyline. Here is a list of some of the Worst Things Done By Hisoka. There is no specific order in this list because I honestly find them equally horrendous.

The Hunter Exam had turned into Hisoka’s playground for killing. Agon was a minor character who had made it to another phase of the Hunter Exam. All was fine until Hisoka hunts him down and kills him.

What makes this scene so dark is that Hisoka kills Agon purely to satisfy his bloodlust. That’s just how messed up Hisoka as a character is. He sees no right or wrong. Putting his self-interest on number one of his list of priorities is what makes Hisoka the antagonist he is. He is a purely bad guy functioning on his needs to satisfy his lust for an adrenaline rush.

The scene from both versions of the anime (1998 and 2011) never fails to creep fans out. Hisoka’s insane run towards Agon is one of the scariest scenes I’ve ever seen.

Also Read: Anime Similar To Hunter X Hunter that you Will Love Watching! 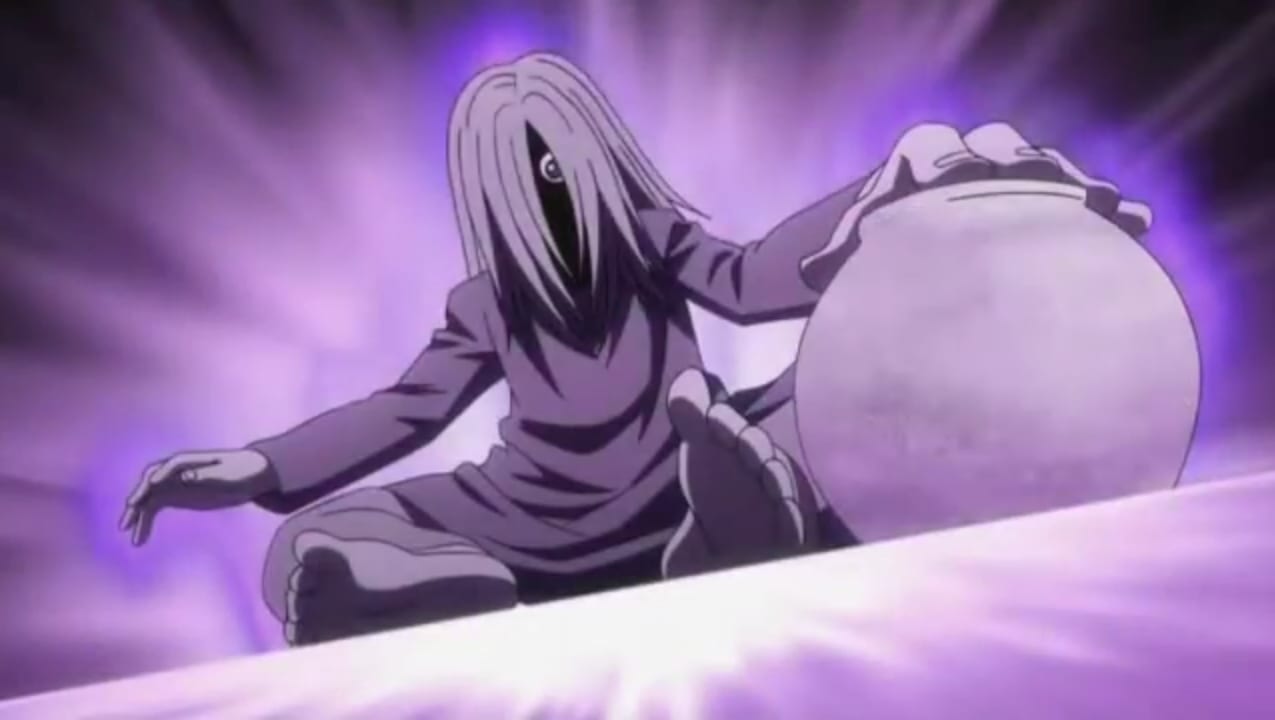 After the resurrection, Hisoka returns with a new chain of thoughts. Before, he was obsessed with fighting strong characters. It is also depicted that seeing strong fighters also arouse him.  But, after getting killed by Chrollo, Hisoka Morrow turns into the grim reaper (figuratively) that he was renowned as.

To omit his previous mistakes, Hisoka decides to kill the source of Chrollo’s powers before killing Chrollo himself. He hunts down Kortopi, whose Gallery Fake would be considered a threat, and kills him.

Killing enemies does not sound like a terrible thing to do in an adventure/fantasy anime. It is rather a question of how he kills him which makes this one of the worst things done by Hisoka. Kortopi was already the physically weakest member of the Phantom Troupe. Hisoka kills him when he did not have his ability. Not only the man he killed was unarmed, but he was also in the bathroom taking a piss.

At the same time when Hisoka kills Kortopi, he heads off to kill another character from the Phantom Troupe, Shalnark. Just like Shalnark, he didn’t have his ability, Black Voice at the time of the killing. After killing Kortopi in the bathroom, he throws his severed head towards Shalnark.

The change in vision after his death changes him. He leaves the head lying around and chains Shalnark to a swing. A brief panel shows Shalnark being eaten by crows which was a downright cruel sight.

Characters in most anime series (be it villains or heroes) carry tasks with honor. The same can not be said for Hisoka. Honor means nothing for him as he sees no wrong in killing Kortopi and Shalnark in any situation.

Usually, killing does not require a reason for Hisoka. Gotoh was a character that fans had taken a liking towards. He was a butler of the Zoldyck family and was sent for taking care of Killua. Being a kind-hearted father figure, his death felt like a blow in the fandom. It was depressing and cruel that led more fans to hate Hisoka

One wouldn’t expect Hisoka to be the kind to “follow orders” but if it is Illumi. The immediate reason for Gotoh would be that he was in the way when Hisoka was trying to kill Alluka. But, if you really think about it, it actually served multi-purpose.

Illumi had already asked Hisoka to finish Gotoh if needed. This was easier for Hisoka because he was a fanatic of the stronger hunters. Gotoh was already grown and had reached his potential. For Hisoka, who only saw worth in strength, Gotoh was a ripened fruit that he chose to pluck.

Hisoka’s utmost obsession with Gon is taken steps further into darkness when Hisoka claims that Gon’s stare turns him on. His traits as a pedophile are shown more explicitly in the manga which gives us an unannounced confirmation about Hisoka’s twisted line of sight. 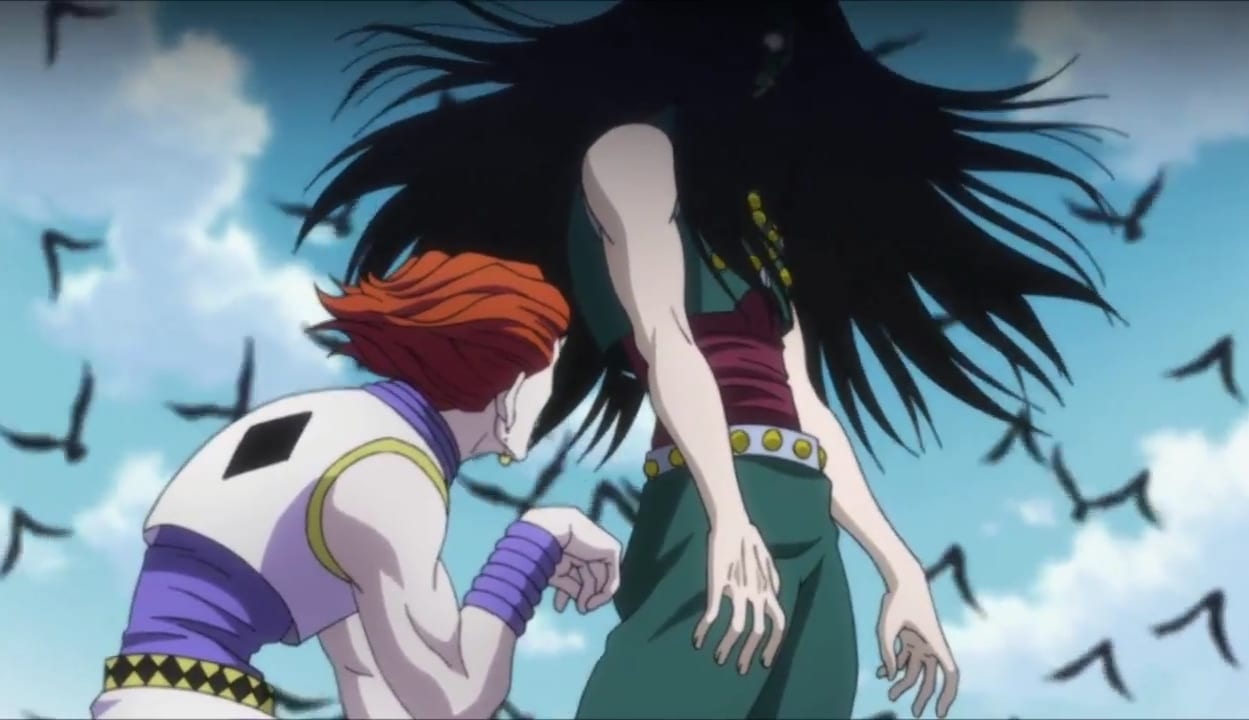 In another scene, Hisoka asks Illumi if he can kill Killua to which he receives a dark reaction from the latter. He later says that he was joking and they let it go. However, although according to the translated versions of the manga and anime he does say he wants to ‘kill’ Killua but the original version is more screwed. As per the Japanese version (in voice and writing), Hisoka actually asks Illumi if he can sleep with Killua.

Hisoka does not stop at being a merciless killer. Togashi has shaped his character filled with a sex drive. He is often visualized as a pansexual, aroused by stronger people. Yet, even for a pansexual, seeing kids as sexual partners is completely disgusting. 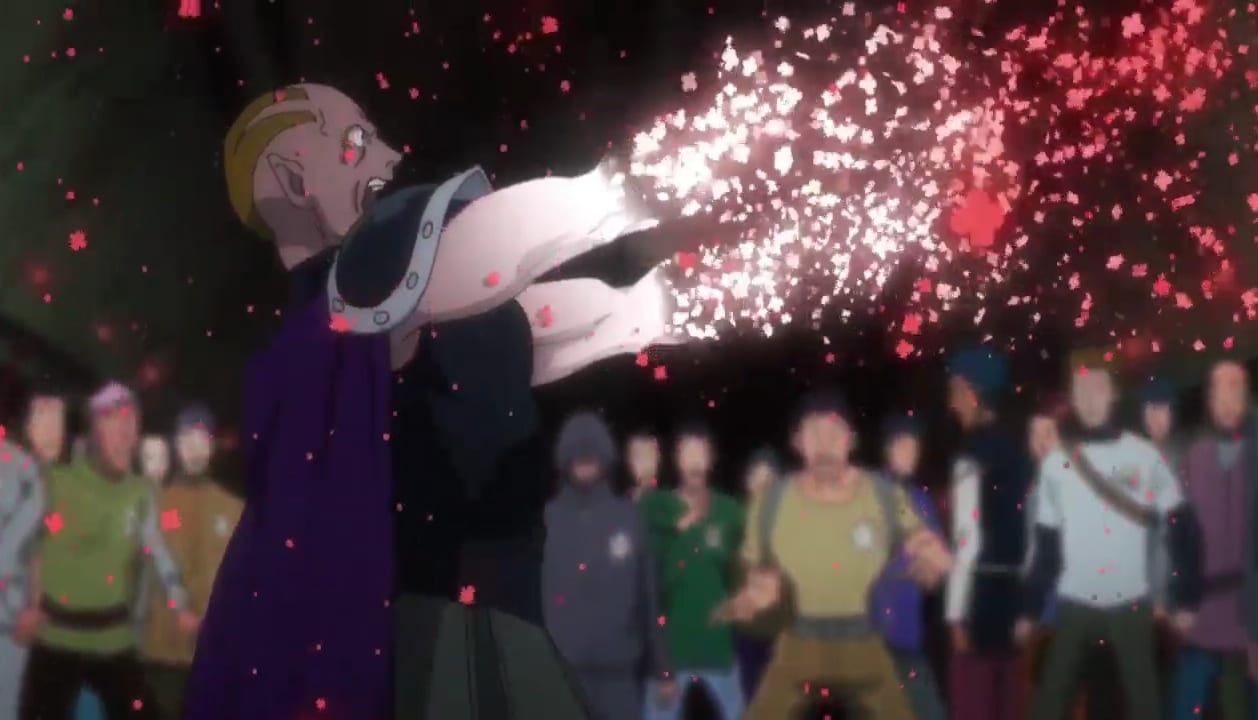 Hisoka kills an Examiner because he bumped into him: Hunter x Hunter.

Antagonists with a psychopathic tendency are not so uncommon in anime. Hisoka Morrow could easily fall into their category and at the same time be worse than them. During the Hunter Exam arc, he kills more people than we wished to see die. While fans were just starting to get acquainted with this character, he begins by one swift heinous act of cutting off someone’s arm.

Hisoka’s introduction was straightforward and showed us exactly what a sadist he was. Now, we have seen anime characters cut all sorts of body parts. While most could be justified, this one is just difficult to do so. Hisoka cuts off this examiner’s arm simply because he had bumped into him.

Being a sadist almost sounds like an understatement for this character every time he pulls acts like this. As scary as this sounds, this scene was the introduction of Hisoka.

Chrollo was not someone innocent. It was already predictable that he would meet his end. However, when he kills Hisoka, he had the worst coming towards his way. Hisoka makes sure to strip Chrollo of his powers before he kills him. He kills the members of Phantom Troupe first to make sure that he cannot derive their powers. But, why does killing Chrollo make it his worst act?

Had it been limited to killing Chrollo and the Phantom Troupe, it would still make sense. But, amidst their fight, they also kill innocent people. Hisoka is seen having fun as he tosses people like a ping pong ball.

The Hisoka Vs. Chrollo battle was not one between protecting and attacking. It was a large battle of villains. They are both screwed-up characters with no regard for innocent blood spilled. When antagonists with no honor fought, they did not care for the lives at stake. The only difference between them now is that while Chrollo perished, Hisoka continues to live without regrets.

Also Read: I’m a Spider, So What? Episode 16: Preview and Recap

This is yet another cold-blooded killing during the Hunter Exam arc. Geretta was smart and could have easily made it to the final phase if Hisoka was not around. He had a good sense of strategy and his abilities were outstanding. Moreover, he had an advantage over being a hunter before. He manages to steal two badges from Gon; one belonging to him and the other of Hisoka.

Unfortunately, he crosses the path with the grim reaper and is murdered. It is a bit saddening because Geretta, despite his shrewd nature had good potential. It was not expected by these examinees that Hisoka would turn out to be a major obstacle during this exam. His death takes place off-screen so the proper details are still unknown.

Also Read: The World Ends with You The Animation Episode 4: Preview and Recap 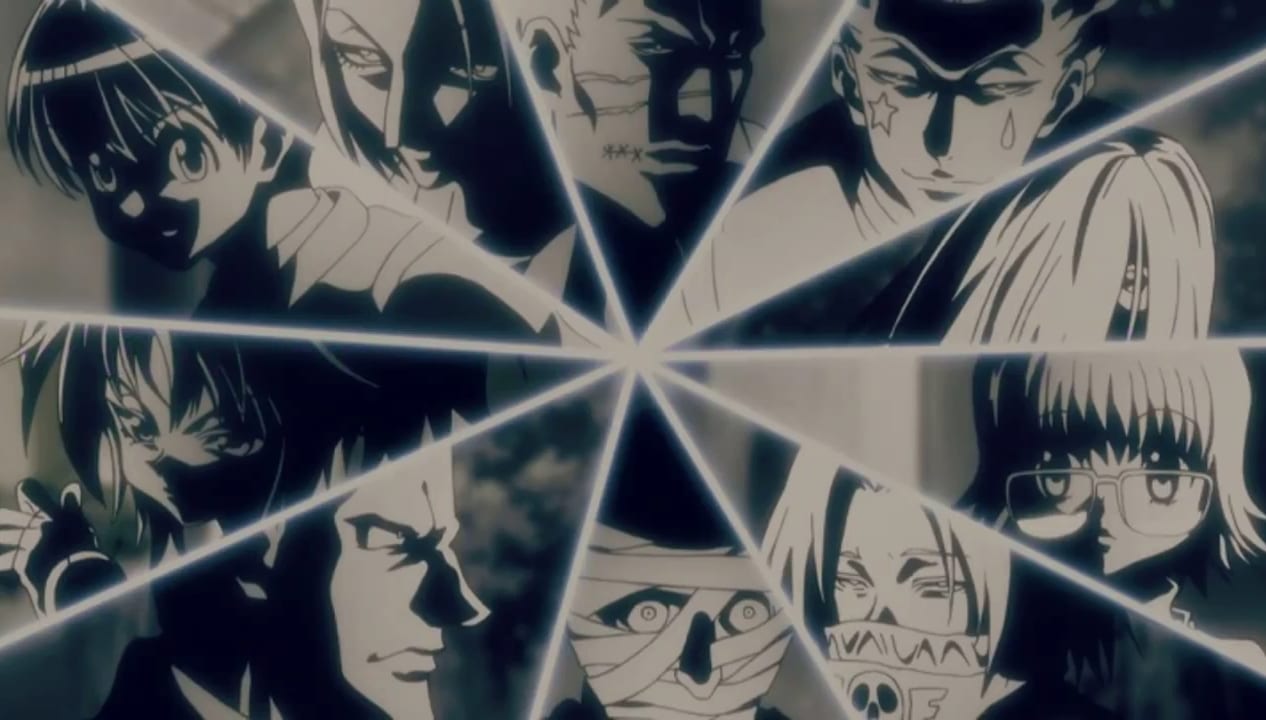 For the clown, deceit comes easy. Although Hisoka had been a member of the Troupe, he later reveals that he had actually never been a true member. As mentioned multiple times, for Hisoka, fighting is a heavenly pleasure. Seeing Chrollo’s overflowing power, he wanted to fight him too. This was the only reason why he wanted to falsely join the troupe.

For Chrollo, who saw Hisoka as a threat, letting him join was more beneficial than having him kill his spiders. Additionally, he also found Hisoka interesting. But, his deceit was not unnoticed by the other members of the troupe. They had mentioned many times being uncomfortable around him. Feitan straight out admitted that he hated him too.

But, Hisoka tried to turn the tables on them after he stopped finding the opportunity to challenge Chrollo. Seeing how he was never alone, Hisoka takes Kurapika’s help. Perhaps even Chrollo never saw it coming that Hisoka would betray the Phantom Troupe by selling them to their enemy, Kurapika.

Chrollo gains the ability to look into the future. Since Hisoka was already infiltrating the troupe, this could be some big trouble for him. But, once again, it could be more difficult to get hold of Hisoka through mere fortune-telling.

As per Hisoka’s original fortune, he would find Chrollo in two weeks. However, he alters it using his Nen. This was a very interesting plot twist in the story. He alters the fortune for his benefit but he is found either way. This further ignites the progression of the stories because now the members of the troupe know that Uvo’s death had occurred under Hisoka’s involvement.

Also Read: Kengan Omega Chapter 107: Spoilers and Where To Read?

Hunter x Hunter has introduced multiple new twists. The manga went under a hiatus after the mangaka faced intense pressure from the company. However, this is quite understandable as genius plots do not come to mind overnight.

As for characters like Hisoka Morrow, the fandom has openly criticized the character and anyone trying to appreciate it. In my personal opinion, characters like Hisoka indirectly poke at conservative issues that people refuse to address. He is truly a petty character that I would despise if he has existed. Yet, I cannot defy from appreciating the creation of one of the most feared antagonists of all time. He has the true essence of a crooked villain with no sense of justice. This is the very reason why I feel Hisoka deserves appreciation, that is, for carrying out his role with complete efficiency.

The post 10 Worst Things In Hunter x Hunter That Hisoka Has Done appeared first on OtakuKart.

Get Fall Guy on the PS4 Now!