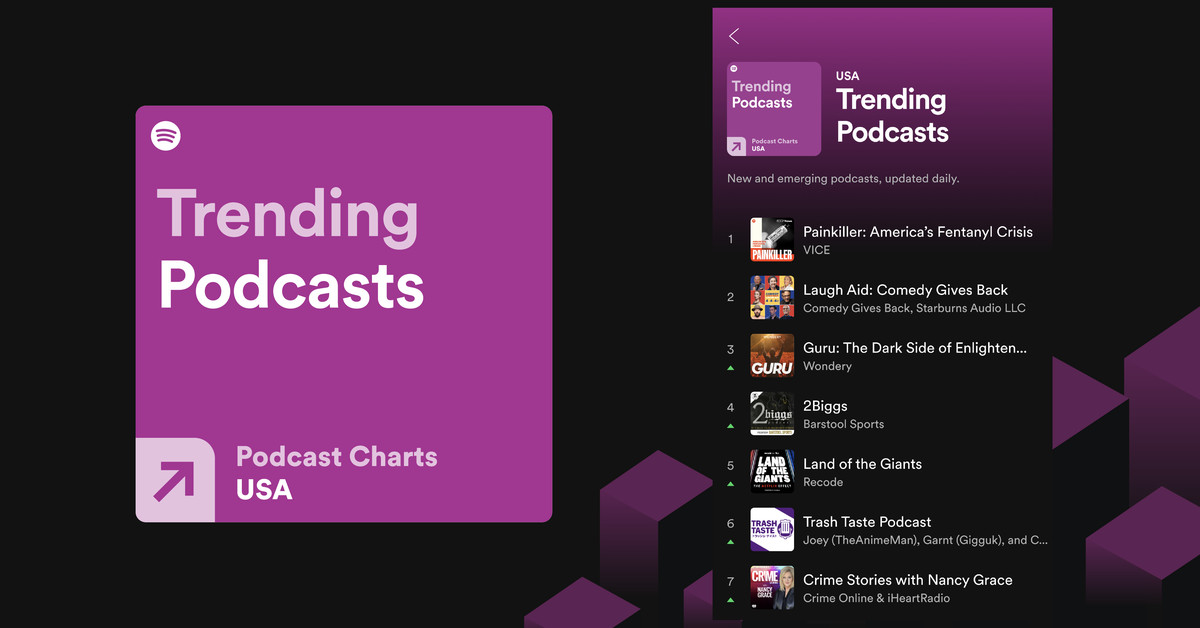 Spotify is revamping its podcast charts today to help listeners find new shows and keep up with what people are enjoying in their area. This brings a well-known, and controversial, feature in the podcasting industry to Spotify, making the app more on par with other popular players, like Apple Podcasts.

The two initial podcast charts will be called Trending and Top. Trending, which is based partially on the speed of growth in listener numbers, includes 50 rising shows, while Top will be the 200 most popular shows overall and will be localized by region. Top, which already exists in a much smaller form currently, can also be separated into categories, like business, comedy, and technology, in certain regions. The charts will be available in 26 countries, including the US, Mexico, the UK, Brazil, and Germany. Both will be updated daily.

Podcast charts can be controversial, especially because the algorithms that determine their rankings are often opaque. People try to game them, too, making people in the industry question their legitimacy. A Spotify spokesperson tells The Verge it has “overlapping systems” in place that’ll monitor fraudulent activity and remove bad actors from the service.

Spotify has battled listener bots in the past that try to inflate music plays and royalties. In those cases, the incentive to cheat the system was higher because the scammers were paid per listen, so long as they published and created the music. Podcasters aren’t paid per listen, which is one reason Spotify has wanted to focus on the industry.

Still, people have tried to figure out how to game the podcast charts on other platforms. The charts could make shows more popular sheerly by exposing listeners to podcasts they haven’t heard. In 2018, podcaster John Perotti was able to pay $5 to someone online who then managed to get his tiny show to number 55 on Apple’s top podcast chart. The same could happen on Spotify as podcasters seek more attention and listeners.

Google is delaying the shutdown of Chrome apps, but you probably weren’t using them anyway

Minecraft: Education Edition is available on Chromebooks just in time for the school year

Gogo is trying to sell its commercial in-flight internet business