Peter Thiel is spending $850,000 to bring ‘Muslim registry’ architect to the Senate 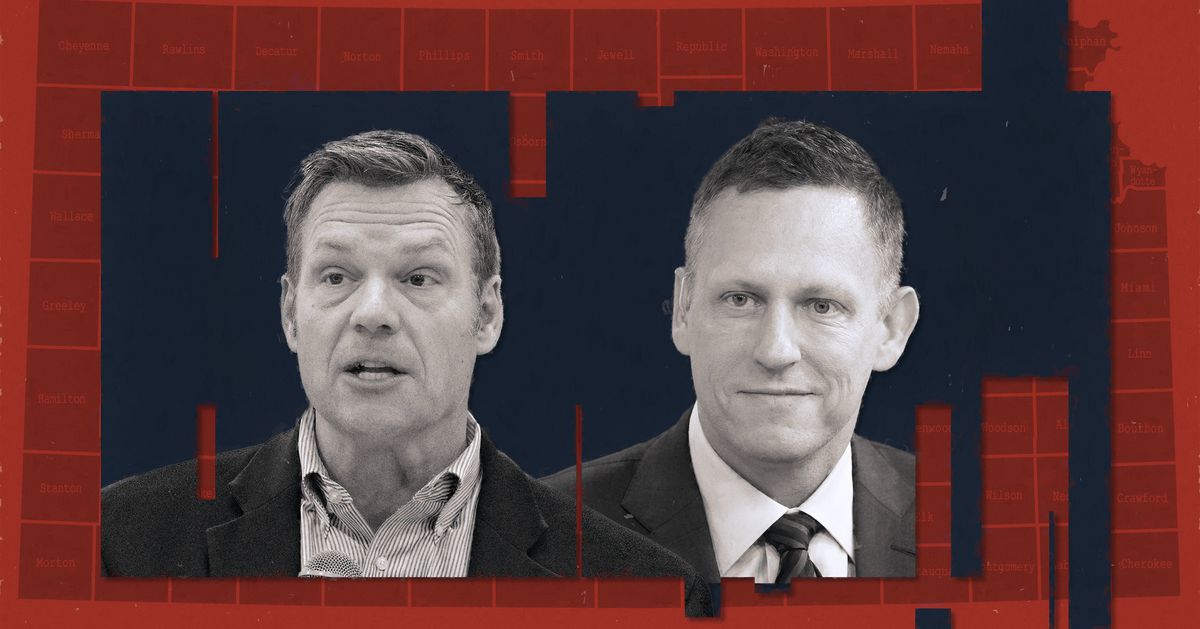 An upcoming primary in Kansas has been upended by billionaire Peter Thiel, who is pouring hundreds of thousands of dollars into a PAC supporting the hard-line anti-immigration candidate. While traditional Republican Party organizations have backed Rep. Roger Marshall (R-KS) for the open Senate seat, Thiel has put his resources into a PAC backing Kris Kobach, a figure in the extreme anti-immigration wing of the Republican party, who has been linked to Trump’s Muslim ban and is currently involved in a private crowdfunded effort to build a wall along the southern border.

Much of Thiel’s support for Kobach has come through the Free Forever Political Action Committee, an independent group funded almost entirely by Thiel. Thiel has donated a staggering $850,000 to the group, with the PAC only reporting $30,000 in donations that did not come from the secretive billionaire. Thiel’s most recent donation was $500,000, made in a single lump sum on June 25th. Thiel also personally donated the maximum $5,600 contribution to Kobach’s campaign in September of last year, part of a wave of early donors that included conservative luminaries like Steve Bannon, Rebekah Mercer, and Blackwater founder Erik Prince.

The Free Forever PAC is spending exclusively in support of Kobach’s Senate primary, hoping to win the nomination for the Senate seat recently vacated by Senator Pat Roberts (R-KS). FEC receipts show that Free Forever PAC has spent more than $900,000 on advertising for the primary, either on behalf of Kobach or against Rep. Marshall. Recent polling has Marshall ahead by a slim margin, but as the August 4th primary date nears, spending has increased, including more than $620,000 in print and digital ad buys since July 13th.

An early PayPal employee and pivotal investor in Facebook and Palantir, Thiel has a long history of unorthodox political activity, speaking at the 2016 Republican National Convention and secretly bankrolling a successful legal campaign to bankrupt Gawker Media. Thiel has been open about his support for Kobach — even appearing at a rally for Kobach with Ann Coulter — but the full scale of his support has only become clear with recent FEC filings.

Still, Thiel’s support for Kobach comes as much of the tech industry has publicly opposed President Trump’s immigration restrictions — including many at Facebook, where Thiel still serves on the board of directors. While Mark Zuckerberg has maintained a cordial relationship with President Trump, he has broken most significantly on immigration, speaking out publicly against the Muslim ban and in favor of H-1B visas, both personally and through the immigration reform group FWD.us.

Kobach led the push for a “Muslim registry”

Free Forever PAC’s website makes no mention of Thiel or Kobach, but emphasizes its commitment to hardline immigration policies. The PAC’s website describes its mission “to elect candidates who will fight to secure our border [and] create an America First immigration policy,” alongside strengthening the economy and military.

The PAC’s explicit nativism is unusual for Thiel, who has been most outspoken on behalf of economic libertarianism and a general pessimism toward democratic ideals. Thiel supported Trump’s campaign in 2016 but often distanced from the president’s most extreme immigration policies. Thiel has also been cosmopolitan in his personal choices, emigrating from Germany at a young age and recently obtaining citizenship in New Zealand after being exempted from the country’s minimum residency requirements.

In contrast, Kobach has distinguished himself as an extreme voice on immigration throughout his career. Kobach served on President Trump’s transition team and reportedly led the push for a “Muslim registry,” although he did not end up serving in the administration. He currently serves on the board of We Build The Wall, a non-governmental project attempting to build a wall on the US-Mexico border using crowd donations. Kobach’s campaign allegedly violated federal election law by sending out fundraising blasts to the project’s email list, according to a lawsuit filed by a watchdog group.

Civil rights groups have been particularly alarmed by Kobach’s apparent support from alleged white supremacist organizations. He has received funding from a number of extreme anti-immigration figures, and critics have alleged connections to fully declared hate groups. In 2018, his gubernatorial campaign was found to be employing three members of the American Heritage Initiative, which rivals described as a campus offshoot of the white supremacist organization Identity Evropa.

Similar issues have already surfaced at Free Forever PAC. The group does not list any employees, but FEC records show that in February, the group paid $1,500 to a man with the same name and address as one who was arrested in 2011 for spray-painting anti-immigrant graffiti on a local overpass. The 2011 graffiti included phrases like “You can’t have a 1st world country with a 3rd world population” or “Whites, do you want to become a minority? If so, support mass immigration.”

Once caught, the man told the Chicago Tribune that the graffiti was not motivated by hatred of any specific racial group, but by “my concerns over immigration policies that I think are hurting the short- and long-term interests of all Americans.”