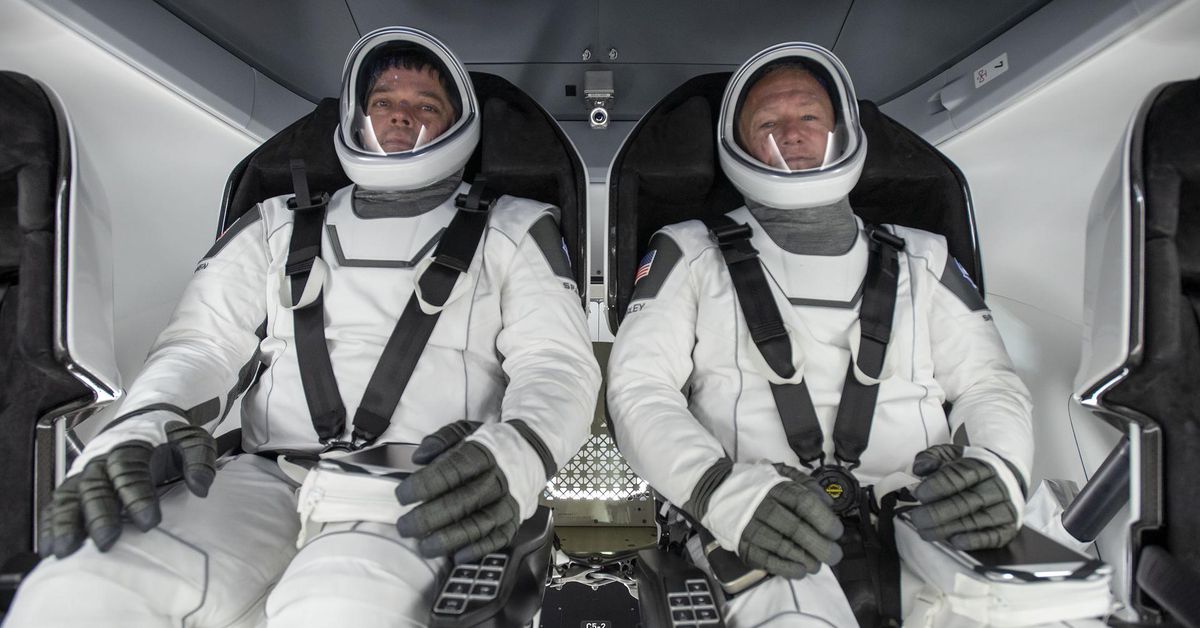 This afternoon, NASA astronauts Bob Behnken and Doug Hurley are scheduled to start their journey back to Earth inside SpaceX’s new Crew Dragon, bringing an end to their historic flight to the International Space Station. If all goes to plan, the two will splash down in the Crew Dragon off the western coast of Florida on Sunday afternoon.

Getting back to Earth from orbit is no easy task, and the two astronauts have a long trip ahead of them before they’re back on solid ground. Once Behnken and Hurley undock from the space station, they’ll spend the next 18 hours in orbit, slowly distancing themselves from the ISS, before making the dive into Earth’s atmosphere. That begins a harrowing trip down to the surface, as the Crew Dragon experiences extreme temperatures reaching up to 3,500 degrees Fahrenheit and slows down from 17,500 miles per hour.

Things get underway this afternoon, when Behnken and Hurley climb inside the Crew Dragon and close the hatch at around 5:45PM ET. They’ll remain inside until the scheduled time for undocking at 7:34PM ET. Hooks holding the Crew Dragon in place at the Station will retract, releasing the capsule into space. Right after that, thrusters on the Crew Dragon will do two quick burns in order to separate out further from the ISS.

A couple hours after undocking, the Crew Dragon will do another engine burn to put the vehicle on the path toward its planned landing site. Right now, NASA and SpaceX are targeting a splashdown off the coast of Pensacola, on the edge of Florida’s panhandle in the Gulf of Mexico. The location is one of seven potential sites around Florida where the Crew Dragon could land. NASA and SpaceX would rather the Crew Dragon land on the east side of Florida, near Kennedy Space Center in Cape Canaveral, Florida. However, Tropical Storm Isaias is projected to skim eastern Florida this weekend, forcing Behnken and Hurley to head farther west. If Pensacola doesn’t work out, the Crew Dragon will head toward a backup site outside of Panama City. If either location works out, this will be the first time a spacecraft has touched down in the Gulf of Mexico.

After that final burn, it’s a long wait until things pick back up again. Behnken and Hurley will try to get some sleep overnight ahead of their scheduled descent through the atmosphere on Sunday afternoon. At around 1:46PM ET on Sunday, SpaceX will jettison a big chunk of the Crew Dragon ahead of the landing: the capsule’s trunk. It’s a cylindrical piece of hardware attached to the back end of the capsule, providing support during launch and providing extra room to carry cargo. It also houses all of the solar panels that generate power for the Crew Dragon during flight. But when it comes time to land, SpaceX doesn’t need the trunk anymore, so it separates and falls into Earth’s atmosphere, where it burns up.

At 1:51PM ET on Sunday, the final descent begins. The Crew Dragon will burn its thrusters again, taking the capsule out of orbit and setting it on course for Earth. That starts a very quick series of events. The Crew Dragon will start to heat up as it falls through the atmosphere, while the capsule’s outer heat shield should protect the vehicle and the crew inside. The amount of heated plasma that builds up around the capsule is so intense that it actually triggers a communications blackout that will last up to six minutes.

At 1:51PM ET on Sunday, the final descent begins

The atmosphere helps to cushion the Crew Dragon’s fall, slowing it down immensely. But the capsule needs a little extra help to get down safely. At an altitude of roughly 18,000 feet, two drogue parachutes will deploy from the capsule when it’s moving at around 350 miles per hour. These small chutes slow the capsule down to about 119 miles per hour ahead of the main parachutes deploying. When the Crew Dragon reaches an altitude of 6,000 feet, four big red and white parachutes will deploy to keep braking the vehicle, allowing it to touch down gently in the ocean.

As soon as the capsule is in the water, two SpaceX boats carrying dozens of people will meet up with the Crew Dragon. They’ll hoist the capsule out of the ocean, retrieve the parachutes, and then get Behnken and Hurley out into the fresh air. The astronauts will then be airlifted to shore, thanks to a helipad on one of the recovery vessels. The helicopter will take them to a plane that will transport them back to Houston.

NASA’s coverage of the landing will begin at 5:15PM ET, just before Behnken and Hurley get inside the Crew Dragon. The agency will provide continuous live coverage all the way through the splashdown, showing scenes from mission control centers at both NASA and SpaceX. That way, viewers can follow along with every part of Behnken and Hurley’s journey home.