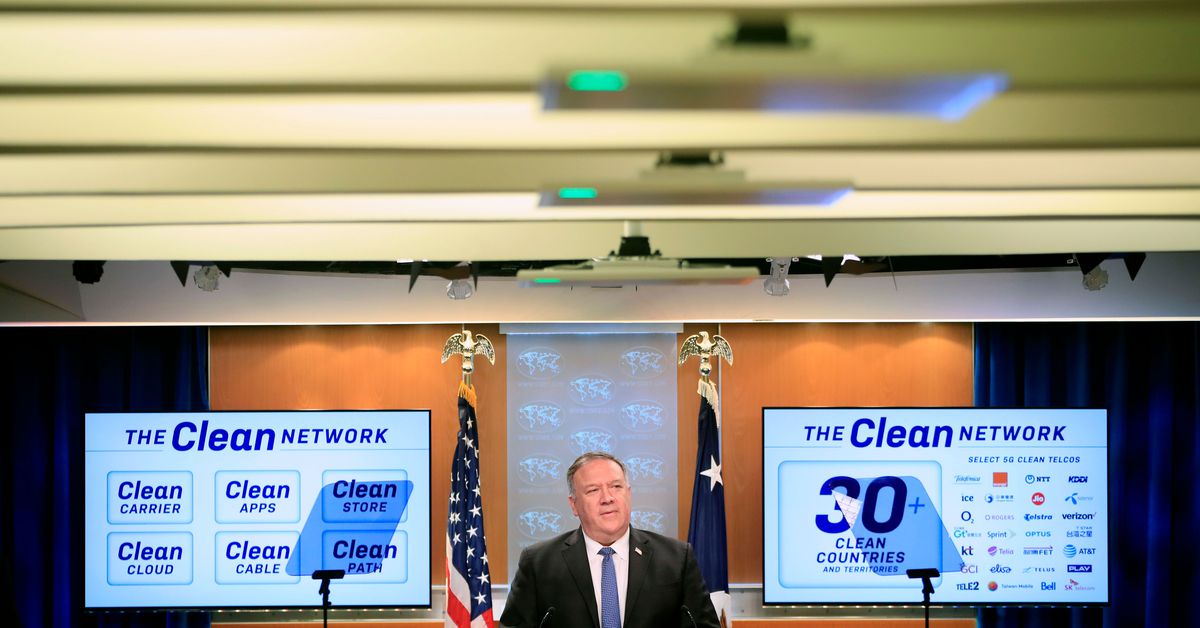 The US has unveiled a vague but aggressive plan to purge Chinese tech companies from America’s internet, creating what the Trump administration has dubbed the “Clean Network” — the US internet as it currently stands, but minus a lot of Chinese tech.

It’s an expansion of the White House’s 5G Clean Path initiative, which was announced earlier this year with the aim of keeping Chinese hardware companies like Huawei and ZTE out of America’s 5G infrastructure. The Clean Network program takes that anti-Chinese impulse and applies it not only to 5G but also telecoms carriers, cloud services, undersea cables, apps, and app stores. It would mean no Chinese apps in US app stores, no US data stored on the Chinese cloud, and no US apps on Chinese smartphones.

Announcing the plan yesterday, Secretary of State Mike Pompeo said a major aim of the program was to keep American citizens safe from Chinese spies and censorship. In what would be a serious escalation of the administration’s current war against TikTok, Pompeo said that under the Clean Program, the US government would remove all “untrusted” Chinese apps like TikTok and WeChat from American app stores.

“With parent companies based in China, apps like TikTok and WeChat and others, are significant threats to personal data of American citizens, not to mention tools for Chinese Communist Party content censorship,” said Pompeo in the press briefing, reports CNBC.

But while the Clean Network program is grand in scope, it’s not clear how or if it can be enforced, especially with the Trump administration distracted by an election challenge in a few months’ time. Experts say the plan as it currently stands is rhetoric and bluster. There is no technical detail on how the administration might implement the aims it outlines, and there’s no reference to the legislative tools that would be needed to make these changes happen.

“The specifics don’t add up terribly well. They don’t speak to a good understanding of how networks function, or a very clear idea of how this is expected to be implemented,” Maria Farrell, an independent researcher in international tech policy, told The Verge. “That does make it seem like more of a rhetorical exercise.”

America “is a bit of talk and no trousers”

Although the plan has invited comparisons with China’s Great Firewall, Farrell says a better comparison might be with Russia’s approach to internet sovereignty. There, the government has been able to pass some laws in areas like data localization, mandating that data concerning Russian citizens is processed in Russia, but it doesn’t have the control or resources that China has to directly oversee and censor the web so extensively.

If the Trump administration is determined to push ahead with the Clean Program, though, it could still be hugely disruptive to the global tech industry by leveraging the tools of international trade. It was able to ban Huawei from using Google’s software, for example, and could potentially apply those same rules to other Chinese smartphone makers. That could be hugely damaging to these firms, hampering their ability to sell devices in lucrative European markets, for example.

What might be harder to stomach for the White House, though, is the backlash it might receive if it bans not only TikTok but all Chinese-made apps from US app stores. On Twitter, games analyst Daniel Ahmad noted that some of the most popular mobile games in the US, titles like PUBG Mobile and Call of Duty: Mobile, are made by Chinese tech giant Tencent. Tencent also owns Finnish mobile studio Supercell, which makes the hugely popular Clash of Clans. Would that count as a Chinese app and therefore a vector for censorship and spying? The current Clean Network plan offers zero clues on questions like these.

Thu Aug 6 , 2020
Samsung’s first look at the upcoming Galaxy Z Fold 2 during its Unpacked event seemed to spend more time focusing on how the new model fixes the flaws of the original rather than emphasizing whatever will make the foldable flagship great. In putting so much effort into convincing customers that […]