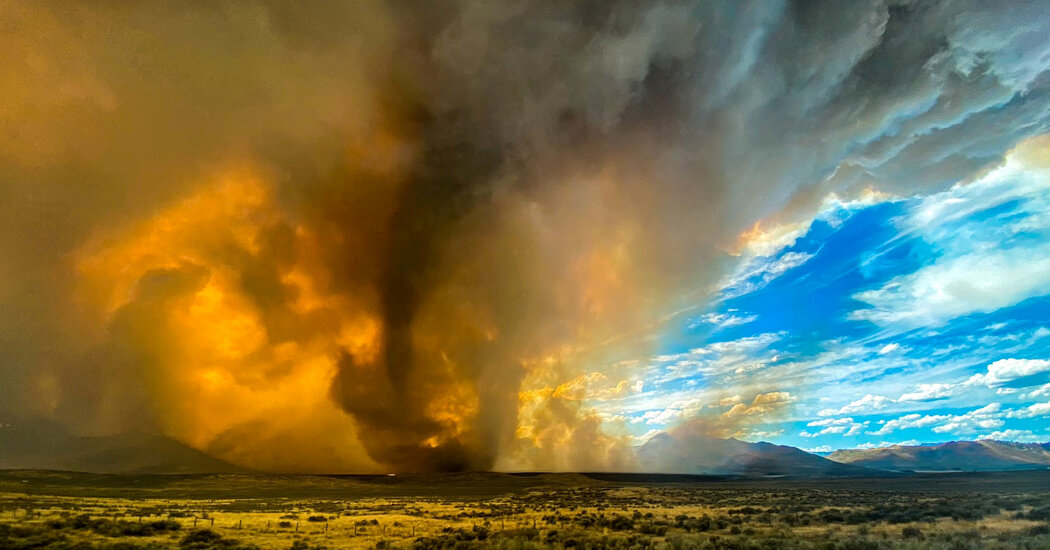 The National Weather Service said it was planning to investigate reports of a rare occurrence of fire tornadoes arising on Saturday from a 20,000-acre wildfire in Northern California.

Dawn Johnson, a meteorologist with the service in Reno, Nev., said on Sunday that the agency had received reports of fire tornadoes in an area of Lassen County, Calif., about 25 miles northwest of Reno.

“It’s not like a typical tornado where it happens, everything clears out and you safely go and investigate,” Ms. Johnson said. “In this case, there’s a massive wildfire burning in the same location, so the logistics are a lot more complicated.”

Doppler radar showed at least five rotation signatures, but Ms. Johnson said she could not confirm that they would all be classified as fire tornadoes.

Multiple components must come together for fire tornadoes to form: turbulent winds, uneven terrain and extreme heat from fire, which causes the air to rise rapidly, said Ben Gelber, a longtime meteorologist with WCMH-TV in Columbus, Ohio. Other elements, like gas being released from burning vegetation, serve as fuel for the tornadoes as well.

“It’s applying our traditional knowledge of tornadoes to a rare phenomenon,” Mr. Gelber said. “It’s so unusual, it’s a little difficult to wrap our heads around. Of course, the towering clouds created by fires, we’ve all seen that. But the tornadic feature or multiple fire whirls, that’s just incredible.”

On Saturday afternoon, the Weather Service posted a warning about a possible “fire-induced tornado” from the Loyalton Wildfire in parts of Lassen County.

The wildfire “exploded most impressively” on Saturday “with a very large pyrocumulus and reports of fire tornadoes,” the service said. “Due to the possibility of very strong fire-generated winds and extreme fire behavior with danger to fire personnel, a tornado warning was issued to heighten awareness in the area of the fire.”

The wildfire started on Aug. 14 near Loyalton, Calif., which is about 45 miles west of Reno. As of Sunday, it was 5 percent contained, the U.S. Forest Service reported.

Shane Snyder, a meteorologist with the Weather Service in Reno, said a fire tornado warning was an unusual alert for his office.

Photos and videos from witnesses on social media showed tornadoes emerging out of intimidating clouds of intense smoke and heat amid singed vegetation.

Mr. Gelber said that fire whirls visible on Doppler radar reflected the intensity of the tornadoes.

In a departure from the norm, the fire rotations seen on Saturday appeared to be moving clockwise, Mr. Gelber said, a difference from the usual counterclockwise direction of tornadoes that form in low pressure systems.

A fire tornado during the 2018 Carr Fire in Northern California tore through neighborhoods in Redding, Calif., a city about 160 miles north of Sacramento. Eight people died as a result of the fire and about 40,000 people were forced to evacuate their homes.