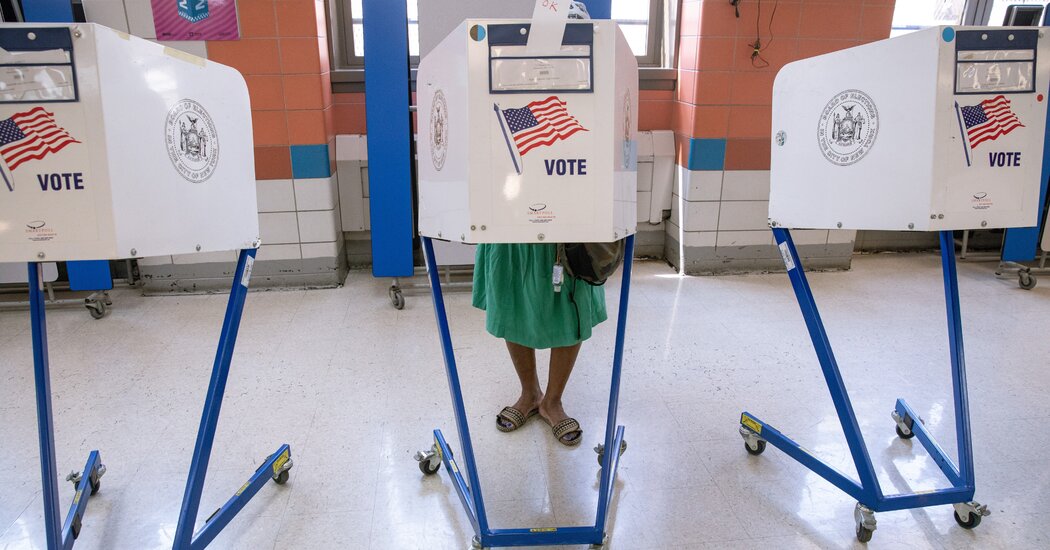 To hear more audio stories from publishers like The New York Times, download Audm for iPhone or Android.

There’s no mystery about what President Trump intends to do if he holds a lead on election night in November. He’s practically broadcasting it.

First, he’ll claim victory. Then, having spent most of the year denouncing vote-by-mail as corrupt, fraudulent and prone to abuse, he’ll demand that authorities stop counting mail-in and absentee ballots. He’ll have teams of lawyers challenging counts and ballots across the country.

He also seems to be counting on having the advantage of mail slowdowns, engineered by the recently installed Postmaster General Louis DeJoy. Fewer pickups and deliveries could mean more late-arriving ballots and a better shot at dismissing votes before they’re even opened, especially if the campaign has successfully sued to block states from extending deadlines. We might even see a Brooks Brothers riot or two, where well-heeled Republican operatives stage angry and voluble protests against ballot counts and recounts.

If Trump is leading on election night, in other words, there’s a good chance he’ll try to disrupt and delegitimize the counting process. That way, if Joe Biden pulls ahead in the days (or weeks) after voting ends — if we experience a “blue shift” like the one in 2018, in which the Democratic majority in the House grew as votes came in — the president will have given himself grounds to reject the outcome as “fake news.”

The only way to prevent this scenario, or at least, rob it of the oxygen it needs to burn, is to deliver an election night lead to Biden. This means voting in person. No, not everyone will be able to do that. But if you plan to vote against Trump and can take appropriate precautions, then some kind of hand delivery — going to the polls or bringing your mail-in ballot to a “drop box” — will be the best way to protect your vote from the president’s concerted attempt to undermine the election for his benefit.

Trump is the underdog in this year’s race for president. He trails by 8.2 percentage points in the FiveThirtyEight average; by 6.9 percentage points in the RealClearPolitics average and by 9 percentage points in the 270toWin average. He’s given up on expanding his coalition or winning a majority of voters (if he ever cared in the first place). And he’s botched the coronavirus pandemic, leaving the United States with an ever-climbing six-figure death toll and a severe economic downturn. Trump is desperate to hold on to power, but he probably can’t win a fair fight. His solution, then, is to do everything in his power to hinder the opposition and either win an Electoral College majority or claim victory before all the votes have been counted.

A key element of Trump’s strategy is to undermine the Postal Service’s ability to deliver and collect mail. The president’s postmaster general has removed experienced officials, implemented cuts and raised postage rates for ballots mailed to voters, increasing the cost if states want the post office to prioritize election mail. And Politico reports that Trump’s aides and advisers in the White House have been searching for ways to curb mail-in voting through executive action, “from directing the Postal Service to not deliver certain ballots to stopping local officials from counting them after Election Day.”

If vote-by-mail is the safest option in a pandemic, then the point of the White House’s effort is to create a dilemma for voters who place a premium on safety. Do they mail a ballot and run the risk of a discarded vote, or do they go to the polls and run the risk of infection and illness? Consider the partisan split as well. Fifty-four percent of Biden supporters prefer mail-in voting, according to a July poll from ABC News and The Washington Post, while only 17 percent of Trump supporters say the same.

There are reforms that could keep the president from taking this tack. To account for postal delays, states can pledge to count ballots postmarked on or before Nov. 3, so that they’re included in the total even if they arrive late. To speed up the process, states could permit election officials to verify and count mail-in ballots even before Election Day. They could also decline to release results until all polls close and all votes are in. News organizations, similarly, could set expectations for viewers and bring as much transparency as possible to vote counts and other forms of election analysis.

Nonetheless, there is a chance that the president takes this path regardless of state officials and the media. And there’s every reason to think that some portion of the Republican Party will back him. The Trump campaign and the Republican National Committee are already challenging mail-in voting laws and suing to keep states like Nevada and Pennsylvania from enlarging their scope. It is easy to imagine a replay of Florida 2000, except on a national scale.

The best defense for the president’s political opponents is, if possible, to vote in person. For some, this will mean going to the polls in November, in the middle of flu season, when the spread of Covid-19 may worsen. In most states, however, there are multiple ways to cast or hand in a ballot. Every state offers some form of early or absentee voting, and 33 states — including swing states like Arizona and Wisconsin — allow absentee voting without an excuse. Trump supports absentee voting — it’s how his older supporters in Florida vote — and his opponents should take advantage of the fact that those systems won’t be under the same kind of attack. Many vote-by-mail states also offer drop boxes so that voters can deliver ballots directly to the registrar. And if you must mail in your ballot, the best practice would be to post it as early as possible, to account for potential delays.

Earlier this year, a group of more than 100 people — Republicans, Democrats, senior political operatives and members of the media — gathered to role play the November election, using predetermined rules and procedures. “In each scenario other than a Biden landslide,” writes Nils Gilman of the Berggruen Institute, who helped organize the exercise, “we ended up with a constitutional crisis that lasted until the inauguration, featuring violence in the streets and a severely disrupted administrative transition.”

There you have it. To head off the worst outcomes, Trump must go down in a decisive defeat. He’s on that path already. The task for his opponents is to sustain that momentum and work to make his defeat as obvious as possible, as early as possible. The pandemic makes that a risk, but it’s a risk many of us may have to take.

The Recession Is About to Slam Cities. Not Just the Blue-State Ones.