Chadwick Boseman, Who Starred in ‘Black Panther,’ Is Mourned as a ‘Superhero’ 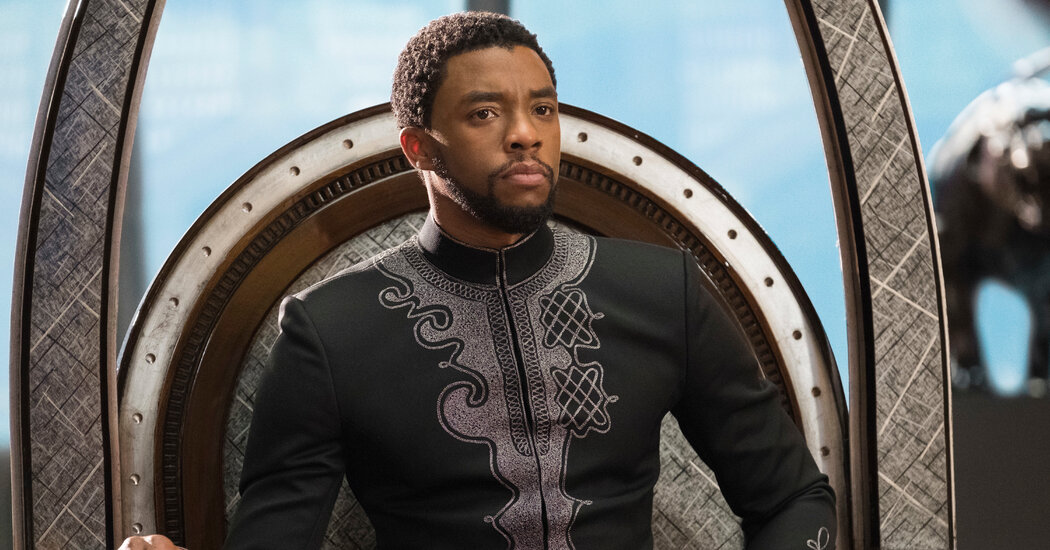 After the announcement late Friday that the “Black Panther” star Chadwick Boseman had died, tributes began pouring in on social media from prominent figures in entertainment, politics and beyond.

Mr. Boseman, 43, had portrayed pathbreaking Black Americans onscreen, including Jackie Robinson, James Brown and Thurgood Marshall. He died on Friday after a yearslong battle with colon cancer.Within minutes, Martin Luther King III, a human-rights activist and the eldest son of the Rev. Dr. Martin Luther King Jr., said that the actor had “brought history to life on the silver screen” in his portrayals of Black leaders.

“As Black Panther, he was also a superhero to many,” Mr. King wrote. “And despite his 4 year long battle with cancer, he kept fighting and he kept inspiring. He will be missed.”

As Black Panther, he was also a superhero to many.

And despite his 4 year long battle with cancer, he kept fighting and he kept inspiring. He will be missed. pic.twitter.com/f0Tc8ByaXj

“You could tell right away that he was blessed,” Mr. Obama wrote. “To be young, gifted, and Black; to use that power to give them heroes to look up to; to do it all while in pain – what a use of his years.”

Former Vice President Joseph R. Biden Jr., the Democratic nominee for president, wrote that Mr. Boseman’s “true power” stretched far beyond Hollywood, and that he had “inspired generations and showed them they can be anything they want — even super heroes.”

He “brought with him not only toys for our patients but also joy, courage and inspiration,” the hospital wrote on Twitter.

Others, like the HuffPost editor Philip Lewis, called Mr. Boseman a “superhero” for having filmed so many movies while undergoing treatment for cancer.

“He was a gentle soul and a brilliant artist, who will stay with us for eternity through his iconic performances over his short yet illustrious career,” the actor Denzel Washington, who once financed Mr. Boseman’s studies at an elite theater program at the University of Oxford, said in a statement to The Hollywood Reporter. “God bless Chadwick Boseman.”

But he was best known for his role as T’Challa, king of the fictional African nation of Wakanda, in “Black Panther,” the 2018 Marvel superhero movie.

“Black Panther,” which smashed box office records, was the first major superhero film with an African protagonist, a majority Black cast and a Black writer and director. Some African-American moviegoers planned special outings to see it and came dressed in African-inspired clothing and accessories.

Mr. Boseman played T’Challa in three other Marvel films, including two of the “Avengers” movies. On Friday, many of his co-stars from those films tweeted about him in personal terms.

“You were always light and love to me,” wrote Don Cheadle, who played a superhero called War Machine.

“What a man, and what an immense talent,” wrote Mark Ruffalo, who played the Hulk. “Brother, you were one of the all time greats and your greatness was only beginning.”

Marvel’s rival DC Comics, the home of Batman, Superman and Wonder Woman, praised Mr. Boseman in a tweet with a photo of the actor in his “Black Panther” role. “To a hero who transcends universes,” the company said. “Wakanda Forever.”

In a statement, the Jackie Robinson Foundation called Mr. Boseman “a consummate professional,” touching on his preparation for the movie “42” and the time he spent with Mr. Robinson’s wife, Rachel Robinson.

“He absorbed every story, every memory and every photo and film excerpt he could consume to help translate the soul of an American hero,” the foundation wrote. “And now, Chadwick will be etched in history as a hero in his own right, especially having shown millions of Black and Brown children the power of a superhero who looks like them.”

“Your light brightened our days,” the actor Forest Whitaker wrote just before midnight, Los Angeles time. “It will continue to brighten our hearts and minds. Let the heavens be blessed as you illuminate the sky.”