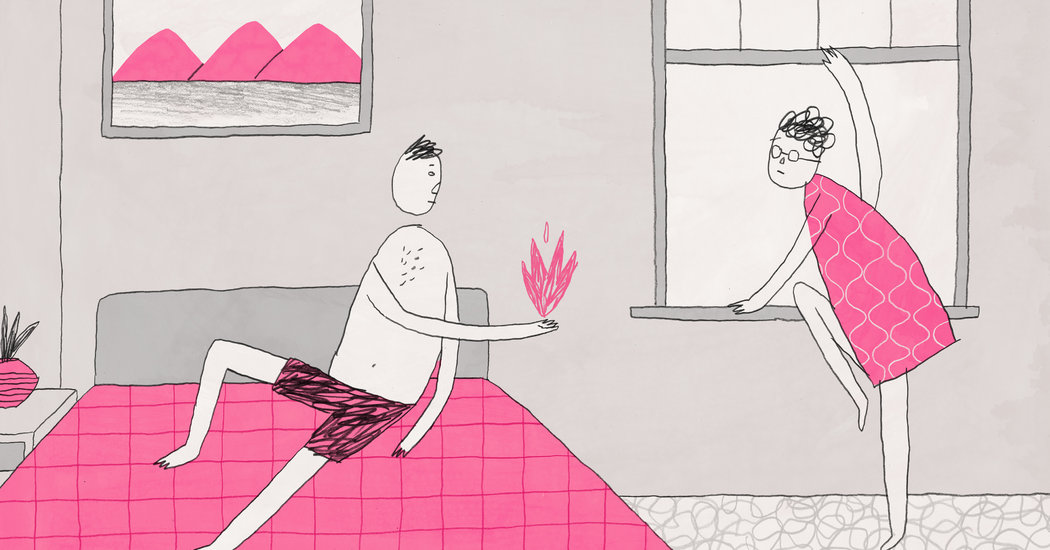 It was a week before our 25th anniversary, and I wanted out.

John and I were sitting in a tent pavilion as women in tiny thongs, platform boots and pasties snaked past us in a line for free ice cream, their behinds nearly grazing our noses. I glanced at my husband. He looked on affably, as if trying to channel Fred Rogers. And even though I had been crying most of the day, I had to smile.

We were halfway through our virgin trip to Burning Man, the temporary metropolis that rises in the remote Nevada desert each summer (although not this summer; coronavirus has made it, as with so much else, online only).

Taking part had long been John’s dream — and my nightmare. But now that equation had been turned on its head, and this voyage had become the inflection point of our marriage, eight days that would save or destroy it.

We had spent four nights camped out among dust devils, nonstop electronic music and some 70,000 utopia-seekers, most of them closer to our son’s age than ours. We had four nights to go.

John first began lobbying for us to go more than two decades earlier. As a reporter, he had traveled to Nevada’s Black Rock Desert, the famed “playa,” to interview the event’s founder, Larry Harvey. John fell in love with the landscape — a flat white vastness rimmed by mountains — and was impressed by Harvey, who started this annual “crucible of creativity” when he built a wooden man and then torched it, a ritual he hoped would help him heal from a broken heart.

[Sign up for Love Letter, our weekly email about Modern Love, weddings and relationships.]

My husband is a shaggy-haired, polite Texan with a thirst for wide-open spaces. He became convinced that seeing a massive artwork burn in the desert, amid throngs of revelers, was something he needed to do — and he wanted to do it with me. As each year’s late-summer burn took place, he would sigh and say, “Someday, we’re going.”

To me, an East Coast skeptic with a delicate digestion, it seemed a hellscape of extroversion, new age art and portable toilets.

Besides, our life together was already plenty adventurous. We had fallen in love as students amid the cornfields and dive bars of an Iowa college town, moved to Washington D.C., spent five years in Europe, then relocated to New York, where our son was born. Fifteen years ago, we left the city for a small Massachusetts town.

Every so often, John would bring up Burning Man, saying, “But you’d like it!”

Watching our son grow, we felt lucky that our bond was airtight, unshakable. Until it wasn’t.

After I turned 50, everything began to change. I was laid off from my longtime job as a magazine editor, and John’s work as a documentary producer kept him away a lot, which had us leading more separate lives, for both better and worse.

Then our son, our only child, chose a university thousands of miles away. Menopause swept over me like a lightning storm. I’m not talking about hot flashes; I felt lit up. The comforts of cozy domesticity seemed diminished. I had freedom and space. I craved more. I noticed there were men beyond my husband and son — and that they were noticing me. It was confusing and exhilarating.

Over a Sunday lunch, I told John that I needed to crack a window. I felt pressure building.

“You want to have an affair?” he said grimly.

“Just some breathing room. A little give, so the whole thing doesn’t break apart.”

It felt like the hardest conversation of our marriage and ended in a bit of a stalemate. The outlines of our new deal, if that’s what it was, were vague. He said he would try to give me space but needed to trust that I wouldn’t hurt him.

I had no desire to hurt John, or myself. I longed for our connection to be recharged. But instead, it wobbled.

John seemed angry and sad. I felt distracted, drifting. Some days, I felt real danger, as if I might actually just drift away. That dark part of me wanted to see it happen. It scared me.

Two years ago, as our 25th anniversary loomed, it dawned on me: Bold action was required. No nice dinner or overnight at a quiet inn.

“We need new material,” I told John. “We need to do something seriously out of our comfort zone.”

He found us tickets. I tried to imagine using oversubscribed portable toilets for eight days.

“You wanted uncomfortable,” he said.

He rented us an RV with a bathroom.

When I told a friend about the plan, she said, “When I hear Burning Man, I think: sand in vagina.”

Another told of a friend who had lost his wife there. Two days later, she straggled back to their camp, announced she had met her soul mate in a meditation circle and left in the other guy’s car.

In the weeks that followed, we both waffled, right up until we either had to confirm the RV or lose our big deposit.

John lay awake all night. This was all his idea; what if it broke us up? What about those meditation circles?

I woke with a thought: I had asked for freedom and space, and he had offered an anarchic party in an endless desert. How could I not take him up on it? “Let’s go for it,” I said.

“I was going to cancel.” Then he shrugged. “But you know how long I’ve wanted this.”

We rushed to gather supplies: solar lamps, dust masks, tarps. Also tutus and fantastic hats. In Las Vegas, we loaded the RV with 36 gallons of water, avocados for me, beef jerky for John.

The scale of the Burning Man encampment was vaster than I had imagined. We ended up parking our rig amid a little village of fellow outliers, including a Nevada state trooper and his wife and two 20-something nurses from Alaska.

During the day, John and I would bike lazily through the heat or shelter under our jury-rigged tarp. At night, we garlanded our bodies with rainbow LEDs and zoomed past glowing art installations. We danced and downed countless free cocktails, surrounded by flesh, naked or nearly, shimmying on top of cars that had been transformed into cathedrals and spaceships, or lined up at the horrifying potties.

On the morning of the fourth day (with four to go), I dissolved into a mess of dust, sweat and tears. I cried in our hot trailer, filled with doubts about this dubious, desperate undertaking, about our relationship, about everything. Whatever I was missing, it wasn’t here. I wanted to leave.

“If you want to go, we’ll go,” John said, holding me tightly.

He needed the catharsis of seeing the man burn. Somehow, I understood this. I took a deep breath and dried my dirty face on his shirt.

By that afternoon, as we ate ice cream among the thong-clad beauties, I regained my mojo. Later, a veteran “burner” told me, “Everyone cries on the fourth day.”

We stayed to see the man collapse into flames, and then for the final act, the incineration of a huge wooden temple as the hordes watched in awed silence. John seemed to float through these climactic moments in extreme happiness. And it wasn’t drugs — he was as straight as a yardstick.

Watching him, I realized that I was happy too. Not only had we made it through; we had entered the next room of our marriage. I had asked him to crack a window (as a possible escape route?), but the opening had instead let in oxygen. We had created for ourselves a bigger space. It felt exciting to think about exploring it together.

How deeply did we get into the spirit of that bacchanal? Let’s just say that one evening, out on the fringe of the encampment, there was dancing — two bare-skinned bodies casting long shadows across the flats, as if pointing toward the future.

Two years later, we’re experiencing the opposite of Burning Man, hunkered (with our son) in our old New England house as the pandemic sweeps the globe. Yet I think we internalized enough of that wide-open space to know the need for psychic distance in our marriage. And we’re better at maintaining it, while still sharing love and support during a frightening time.

Given the current crisis, the year we burned feels like it happened in another eon, but its lesson stuck and is maybe even more relevant now: It takes fresh air to feed a fire.

New Yorkers Are Fleeing to the Suburbs: ‘The Demand Is Insane’