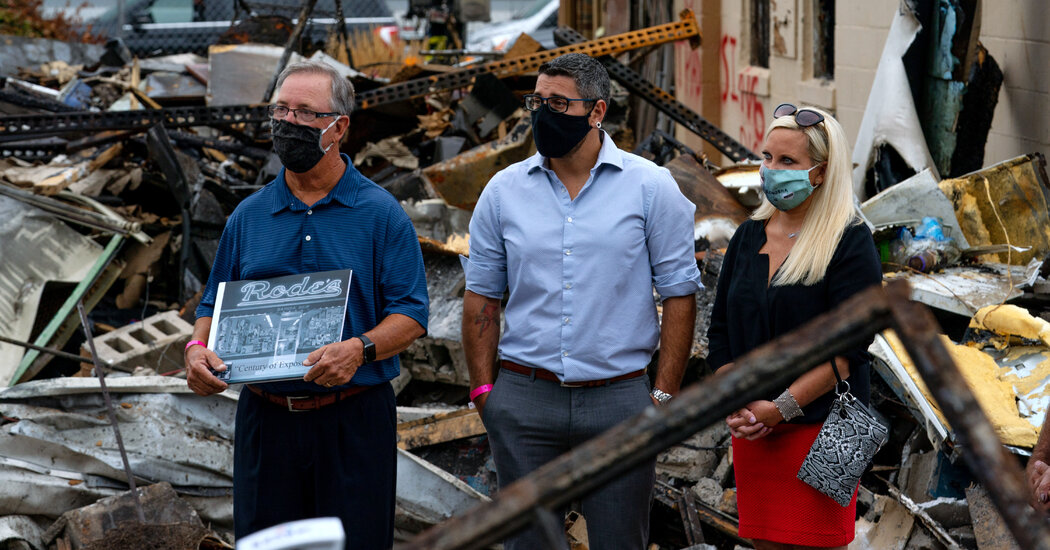 President Trump’s advance team wanted to show him commiserating with the owners of a burned-out camera shop during his Tuesday visit to Kenosha, Wis.

The only problem: the owners wanted nothing to do with Mr. Trump. So the White House did the next best thing — it found the store’s former owner, who still owns the building that housed it before it was destroyed, and passed him off as a business owner aggrieved by the city’s unrest following the police shooting of Jacob Blake.

Mr. Gram said in a Wednesday interview that he did not return a phone call from the White House advance team seeking to arrange for him to appear with Mr. Trump. But John Rode III, whose family started the business in 1911 and sold it to Mr. Gram and a partner in 2012, did show the building on Roosevelt Road, in Kenosha’s Uptown section, to the president and appeared at a round table discussion at a local high school.

Mr. Rode proceeded to thank Mr. Trump and local law enforcement for doing “an awesome job.” In an interview Wednesday, Mr. Rode said he did not hear Mr. Trump’s introduction at the time but watched a recording afterward.

Mr. Gram, 63, has known Mr. Rode for decades. He began working at the camera shop in 1979, on the day he graduated from Milwaukee Area Technical College, before buying the business in 2012. He said he has been inundated with press requests and hate mail since the discrepancy was first reported Tuesday night by WTMJ-TV in Milwaukee.

“I’m a quiet person. I don’t like to get involved in politics,” he said. “I got my first hate email last night. It’s very difficult for me. I’ve had difficulty sleeping ever since the store was burned.”

Mr. Rode, 68, said he remained undecided about whether to vote for Mr. Trump this November but the opportunity to interact with him was something he could not pass up.

“I was not in any way trying to make it look like I owned the business,” Mr. Rode said. “I’ve only done what I thought was best for them. I feel like Tom has kind of stabbed me in the back a little bit.”

Mr. Gram said he was no fan of Mr. Trump’s style and rhetoric, which he said dismissed the concerns of Kenoshans to make a broader political point in defense of police officers.

“I’ve always felt safe in Kenosha,” he said. “He needs to look at the other side of the story too. We’re a community here and we need to heal and we need to grow. I feel that he is too divisive and just needs to work with us.”

Thu Sep 3 , 2020
President Trump and Joseph R. Biden Jr. clashed on Wednesday in dueling remarks and with new advertisements about public safety and the outbursts of violence in some American cities, as the presidential campaign entered an aggressive new phase with the parties tussling over both the issues and the electoral map […]