Trump Encourages People in North Carolina to Vote Twice, Which Is Illegal 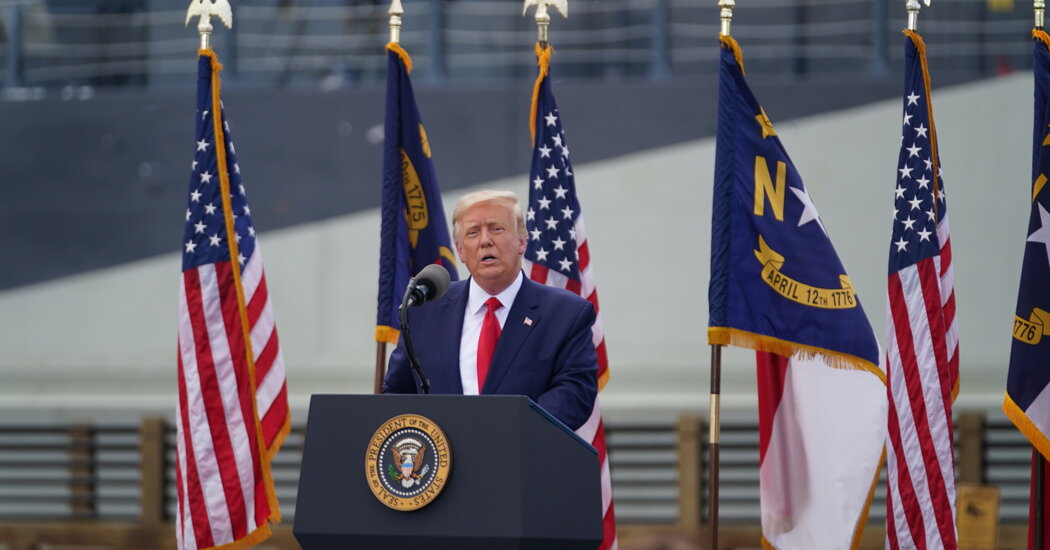 President Trump on Wednesday suggested that people in North Carolina stress-test the security of their elections systems by voting twice — an act that constitutes the kind of voter fraud the president has railed against.

Mr. Trump made the comment in a briefing with reporters, where he was asked about his faith in the state’s system for voting by mail, which is expected to be more expansive in the 2020 presidential election than in previous years because of concerns about the spread of the coronavirus.

Mr. Trump encouraged people to send in an absentee ballot and then go vote in person on Election Day.

“Let them send it in and let them go vote, and if their system’s as good as they say it is, then obviously they won’t be able to vote,” the president said. “If it isn’t tabulated, they’ll be able to vote.”

Voting twice in the same election is illegal.

But Mr. Trump’s suggestion that people should vote twice is one he has discussed privately with aides in recent weeks amid concerns he is depressing turnout among his supporters by raising alarms about the security of mail-in voting.

As the number of people planning to mail in their ballots has increased, Mr. Trump has repeatedly made false claims about widespread fraud in mail voting. With his advisers trying to tell him that he’s scaring his own supporters, including older voters, with his broad condemnations, he has sought to draw a distinction between universal mail voting and more limited absentee voting in which the person is away from home or has a disability.

But even as he has made such distinctions, he has continued to float wild theories about extensive voter fraud that are not backed up by evidence. He has repeatedly detailed far-fetched, seemingly manufactured stories about ballots being forged.

“We haven’t had the kind of widespread use of mail-in ballots that’s being proposed,” Mr. Barr said, adding that he wasn’t familiar with the specifics of North Carolina’s voting laws.

States have long used a number of measures to guard against double voting. Patrick Gannon, a spokesman for the North Carolina State Board of Elections, said the system in North Carolina would prevent a person from voting twice, because only the first vote recorded would be counted.

He encouraged voters to request absentee ballots, send them in and track them on the elections board’s website.

In an interview last year, Kim Wyman, the secretary of state in Washington State, where elections have been conducted by mail for years, said it was unusual for voters to vote twice.

“Is it perfect? No,” Ms. Wyman said. “Is there rampant fraud? No. Do people sometimes make mistakes? Yes.”