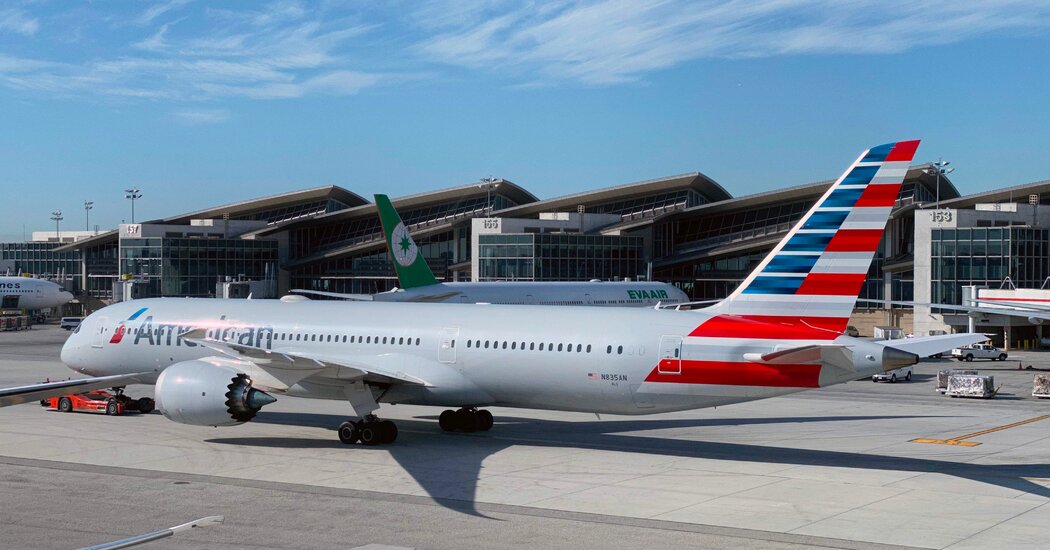 Commercial pilots are accustomed to sharing the sky with birds or, more recently, drones, but on Sunday two pilots reported a novel sighting at 3,000 feet approaching Los Angeles International Airport: a man flying a jetpack.

“Tower, American 1997 — we just passed a guy in a jetpack,” the pilot of American Airlines Flight 1997 from Philadelphia told air traffic control, about 6:35 p.m. Sunday. The exchange was captured and posted by LiveATC.net, which shares live and archived recordings of air-traffic-control radio transmissions.

“Were they off to your left side or right side?” the controller asked. The pilot said the person was 300 yards to the plane’s left, and about 30 seconds later, another pilot said he had also seen the man pass by. The controller, after asking the pilot of JetBlue Flight 23 to keep a lookout, added, “Only in L.A.”

Now both the F.B.I. and the Federal Aviation Administration are investigating.

American Airlines declined to identify the pilot, referring inquiries to the F.A.A. A JetBlue official would not comment.

Seth Young, a pilot and a professor of aviation at Ohio State University, said it was “very dangerous” to fly so close to an airplane, especially in the busy airspace near Los Angeles International Airport.

“The risk is obviously having a collision with that airplane or getting a drone, or the person getting ingested into an engine,” Dr. Young said. “We have these issues with birds flying within congested airspace, as well.”

Because there has been an increase in the past few years in the numbers of aerial vehicles, primarily drones, around airports, the F.A.A. has enacted rules and restrictions regarding flying close to airports, he added. Authorization from the F.A.A. would be required to fly in such controlled airspace.

Could the pilots have been mistaken? Dr. Young said he “would not dispute a pilot’s perception,” as they have excellent vision and are trained to spot small objects in the air.

Jetpacks have long been portrayed as futuristic vehicles in comic books and spy movies, but not much headway has been made in making the technology safe and available for recreational or commercial use.

The main issue is fuel efficiency — most jetpacks are not equipped to fly for more than a few minutes, making it difficult for them to get very high. The devices are mostly popular among enthusiasts or used as tourist attractions for thrill seekers who want to experience a few minutes of flight, typically over open fields or water.

Glenn Martin, an inventor from New Zealand, tried to develop a jetpack that would be practical for commercial use and could reach higher altitudes. The device was named one of the best inventions of 2010 by Time, which reported that the jetpack could theoretically take a person up to 8,000 feet and hold 30 minutes’ worth of fuel.

But when a New York Times reporter tried it in 2008, Mr. Martin said his team had not taken the device higher than six feet. He speculated that “if you can fly it at three feet, you can fly it at 3,000.” Ten years later, the company appears to be defunct.

That does not mean others have quit trying to achieve high-altitude flights with jetpacks. Earlier this year, a Jetman Dubai pilot flew nearly 6,000 feet up using a jetpack. The flight lasted three minutes.

JetPack Aviation, based in the San Fernando Valley area of Los Angeles, invented what it calls “the world’s only JetPack,” which can reach up to 15,000 feet in altitude and can be operated for about 10 minutes. Its founder introduced the jetpack in 2015 with a flight around the Statue of Liberty.

But the company does not sell the jetpack for recreational use, requiring people to take a three-week course to learn how to operate it and use it in a controlled space.

As for Sunday’s sighting, David Mayman, JetPack Aviation’s founder, said, “Honestly, we don’t know who’s working on a machine that would be foolish enough or reckless enough to do that.”