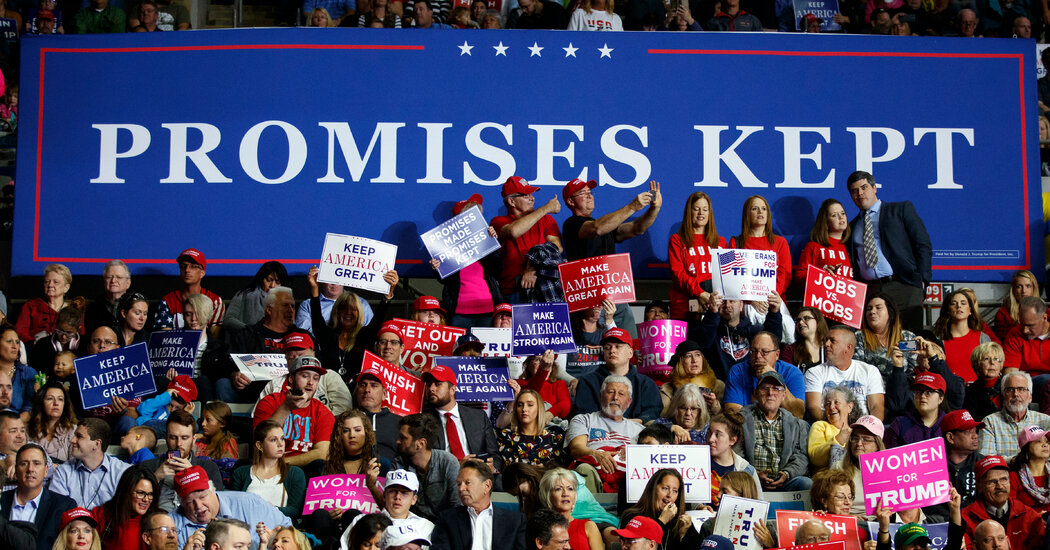 Four years ago as a candidate, President Trump made more than 280 campaign promises. Let’s see how he did:

While Trump so far has built 307 miles of walls along the 1,984-mile border, much of this replaces previous barriers that were dilapidated or blocked only vehicles.

“… and I will have Mexico pay for that wall.”

Mexico is not paying for it. The new wall is costing about $30 million per mile and will be expensive to maintain, for human smugglers have cut open the wall with $50 cordless saws.

Trump himself implicitly acknowledges that he has failed to create law and order, saying, “There is violence and danger in the streets” (speech, Aug. 27, 2020). Periodically, he incites that violence.

“The most basic duty of government is to defend the lives of its own citizens. Any government that fails to do so is a government unworthy to lead.” (speech, July 21, 2016)

“We’re going to work with all of our students who are drowning in debt to take the pressure off these young people.” (speech, July 21, 2016)

Trump has sought to alter the terms of student loan repayments so that students would have to pay an additional $200 billion over a decade. He also attempted to cancel the Public Service Loan Forgiveness program.

Trump has not succeeded in repealing the Affordable Care Act, although he is still pursuing a lawsuit that would overturn it. He has never explained what would replace it.

“You’re going to have great health care at a much lower price. It will cost the United States nothing.” (remarks, July 27, 2018)

Partly because of Trump’s assaults on the Affordable Care Act, the number of uninsured people in the United States has risen for the first time in a decade. An additional 400,000 children are without insurance.

Job creation continued during the Trump administration at roughly the same rate as in the Obama administration, but the pandemic ended that. There are now almost five million fewer Americans with jobs than when Trump took office. In raw numbers, this is the worst jobs record of any modern president.

“It is time to drain the swamp in Washington, D.C. This is why I’m proposing a package of ethics reforms to make our government honest once again.” (remarks, Oct. 17, 2016)

Eight of Trump’s associates have been charged with or convicted of crimes. Nonpartisan ethics watchdogs have repeatedly accused Trump and members of his administration and his family of serious ethics violations, and the Manhattan district attorney suggested last month that he was investigating Trump and his company for “possibly extensive and protracted criminal conduct.”

Trump has appointed conservative (and young) judges across the federal bench, and this will be a major element of his legacy. He was helped by the Senate majority leader, Mitch McConnell, who blocked Obama from filling vacancies; Trump thus inherited an unusually large number of positions to fill.

Trump has made more than 20,000 false or misleading statements since assuming office, by the count of The Washington Post.

“We will build the roads, highways, bridges, tunnels, airports and the railways of tomorrow.” (remarks, July 21, 2016)

“We’re going to cut taxes for the middle class. … We will ensure that the benefits are focused on the middle class, the working men and women, not the highest-income earners.” (speech, Sept. 27, 2017)

The trade deficit is larger now than it was in Obama’s last year in office.

“We will completely rebuild our depleted military. … We will take care of our great veterans.” (speech, July 21, 2016)

Trump has increased the military budget, although he has also taken military funds for his wall. He expanded a program signed into law by Obama for veterans to choose private doctors, while reportedly scorning those who died in wars as “suckers” and trying to keep amputees from participating in a military parade.

The United States did overthrow the caliphate of the Islamic State — a process begun under Obama. But ISIS continues to operate at a reduced level.

“We want to create peace between Israel and the Palestinians. We will get it done.” (remarks, May 3, 2017)

Peace between Israel and the Palestinians is as elusive as ever. However, Arab states such as the United Arab Emirates have warmed to Israel.

The obvious exception is Russia, which interfered in the 2016 presidential election and now appears to be interfering in the 2020 election as well. Russia has injured American troops in Syria, and it is said to have paid bounties to Afghan militants for killing American troops.

The Times is committed to publishing a diversity of letters to the editor. We’d like to hear what you think about this or any of our articles. Here are some tips. And here’s our email: [email protected].