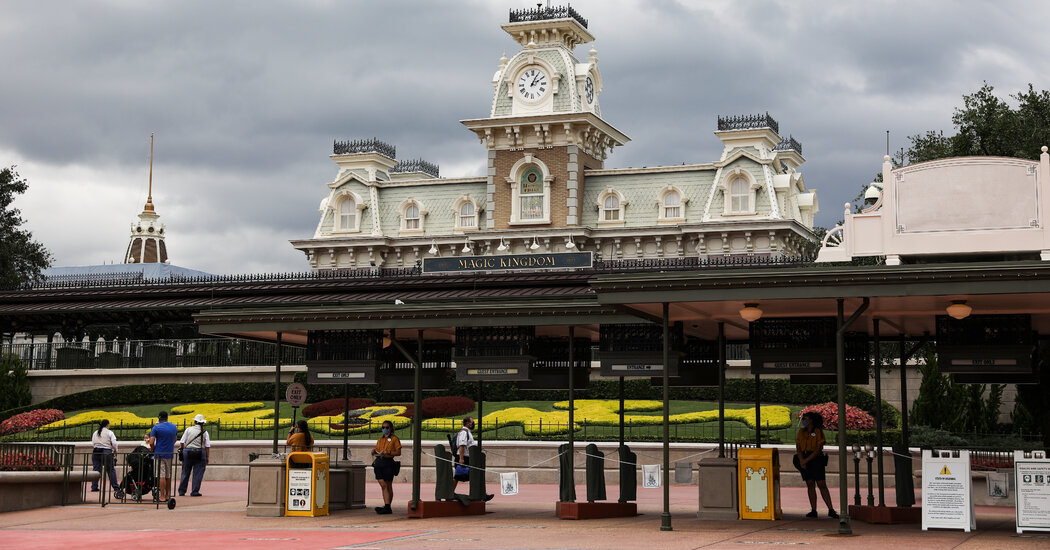 LOS ANGELES — For six months, Disney has kept tens of thousands of theme park workers on furlough with full health-care benefits in hopes that a light at the end of the pandemic tunnel would appear. On Tuesday, Disney conceded that none was coming.

The company’s theme park division said it would eliminate 28,000 jobs in the United States. Theme parks will account for most of the layoffs, although Disney Cruise Line and Disney’s retail stores will also be affected.

“As heartbreaking as it is to take this action, this is the only feasible option we have in light of the prolonged impact of Covid-19 on our business, including limited capacity due to physical distancing requirements and the continued uncertainty regarding the duration of the pandemic,” Josh D’Amaro, chairman of Disney Parks, Experiences and Products, said in an email to “cast members,” Disney’s term for its theme park workers.

About 67 percent of the layoffs will involve part-time jobs that pay by the hour. However, executives and salaried workers will also be among those laid off. Disney’s theme parks in California and Florida employed roughly 110,000 people before the pandemic. The job cuts will come from both resorts.

Disneyland in California has remained closed because Gov. Gavin Newsom has not allowed theme parks in the state to restart operations. About 32,000 people work at the Disneyland complex and the majority are unionized and have been on furlough since April.

Mr. D’Amaro said in a statement that the layoffs were “exacerbated in California by the state’s unwillingness to lift restrictions that would allow Disneyland to reopen.” Disney held a virtual news conference on Sept. 22 in an attempt to pressure Mr. Newsom to lift restrictions. “The longer we wait, the more devastation to the Orange County and Anaheim communities,” Mr. D’Amaro said then. “It’s time.”

In a statement on Tuesday evening, Dr. Mark Ghaly, secretary of the California Health and Human Services Agency, said: “Without a vaccine it is impossible to eliminate the economic impacts caused by this virus.” By taking a “science-based approach” to reopening, he continued, “we can minimize the health and economic risks that would be caused by opening and shutting repeatedly.”

In Florida, where government officials have been much less restrictive, Walt Disney World reopened on a limited basis in mid-July. About 20,000 union workers, or roughly half of the resort’s unionized employees, were called back for the reopening. The remainder have stayed on furlough. (Disney World employed about 77,000 people in total before the pandemic.)

But attendance at Disney World has been weaker than Disney expected. In particular, families have not felt safe flying to Florida for vacation, according to travel agents. Families are also delaying visits because they don’t want to pay for Disney excursions when the experience remains limited — no fireworks, fewer dining options, no hugs from Mickey Mouse, shorter park hours — and they have to wear face masks.

So far, Disney’s zealous theme park safety procedures appear to be working. University epidemiologists and public health officials have said that — as far as they can tell — there have been no outbreaks among Disney workers or guests. Disney has declined to comment except to note that new infections in Florida have dropped sharply since Disney World reopened.

Revenue at Disney’s worldwide theme park division, which includes a still-closed cruise line and the Disney Store chain, totaled $1 billion in the most recent quarter, an 85 percent decline from the same period a year earlier. Operating profit plunged by $3.7 billion, resulting in a quarterly loss of $2 billion. Mr. D’Amaro said on Tuesday that the restructuring would create a more “effective and efficient operation when we return to normal.”

The rest of Disney has been bouncing back. Live sports returned to ESPN in August. Movie and television production has restarted, although Disney continues to postpone film releases. Disney+ has been growing rapidly enough to keep Disney’s stock price relatively high at $125, down 3 percent from a year ago.

Central Florida’s once-booming leisure and hospitality industry has been decimated by the pandemic. Unemployment in Orange County — home to Disney World, the Universal Orlando Resort, SeaWorld and dozens of mom-and-pop tourist attractions — stood at 11.6 percent in August, up from 3.1 percent in August 2019, according to the Florida Department of Economic Opportunity. Osceola County, which abuts Disney World to the south, had 15.1 percent unemployment in August, up from 3.5 percent.

Statewide, the August unemployment rate in Florida was 7.4 percent.

Universal Orlando laid off a steady stream of employees over the summer and recently notified state officials that about 5,400 workers had been placed on extended furlough. SeaWorld laid off 1,900 employees at its Orlando properties this month. A few days before its layoffs, SeaWorld surprised workers by altering its severance policy, moving to a discretionary system from a fixed formula based on tenure.

Workers at Universal and SeaWorld are not unionized.

“The layoffs and furloughs have been devastating,” said Mike McElmury, trustee of Teamsters Local 385, which represents about 5,000 Disney World bus drivers, laundry workers and entertainers, including those who greet visitors in costume as Disney characters. At least 2,000 were still on furlough as of Monday. “We’re at the point where people are having a hard time figuring out where they will get their next meal,” Mr. McElmury said.

Over the summer, an Orlando union organized a weekly food bank for furloughed theme park workers. Jeremy Haicken, president of Unite Here Local 737, which represents roughly 18,000 Disney World food service workers and hotel housekeepers, said that its food bank was initially stocked to serve about 200 families. About 800 were provided with free groceries on Saturday, with the line stretching two miles, Mr. Haicken said.

Unite Here affiliates have spent more than $100,000 on the effort, in part by soliciting donations on its website.

Anaheim is in similarly rough shape. Disney had planned to reopen the property on July 17 with the same safety protocols as in Florida. But Disney abandoned that plan after unionized Disneyland employees told Mr. Newsom that they worried that Disney was moving too fast; Mr. Newsom threw the brakes on a regulatory process that would allow California theme parks to reopen.

Unemployment in Anaheim reached 15 percent in July, the most recent month for which data is available, up from 3.3 percent in July of last year. The Anaheim Chamber of Commerce said this month that Disneyland’s closure had cost local municipalities $1.3 billion in taxes and other revenue.

“It’s a disaster,” Harry Sidhu, Anaheim’s mayor, said at a news conference on Sept. 16 in which he pleaded with Mr. Newsom to allow Disneyland to reopen. Mr. Sidhu was joined by officials from nearby Garden Grove and Buena Park, home to the Knott’s Berry Farm theme park, which had 2019 attendance of roughly four million.