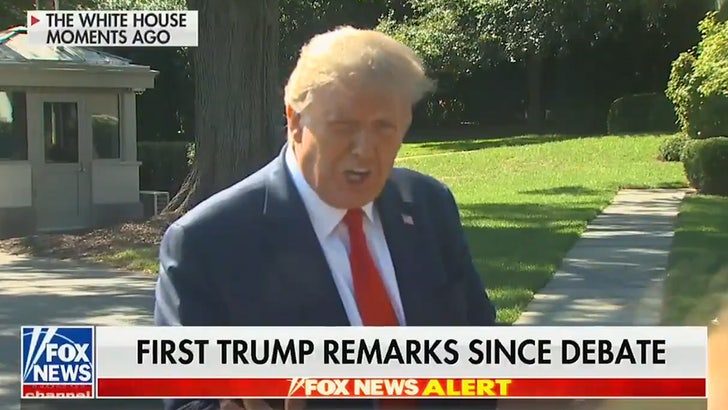 President Trump is walking back his ominous message to the far-right group, Proud Boys … and now says he doesn’t even know who they are.

Trump fielded questions on the South Lawn about the “stand back and stand by” remark he made when debate moderator Chris Wallace asked if he would denounce white supremacy.

He told the White House press corps … “I don’t know who the Proud Boys are” and asked reporters for a definition of the group — which has been widely labeled a neo-fascist, male-only, politically violent organization.

The President added, “Whoever they are, they have to stand down — let law enforcement do their work.”

The Prez then pivoted to attack the liberal left and Antifa instead, much like he did during the first presidential debate.

As we reported … the debate has been widely panned as a disgrace — or much worse — and the ratings were way down from 2016. That could be the result of voters turned off by the nastiness or voters who’ve already decided just not watching.

Either way, it could be too late for this kinda damage control

Donald Trump Concedes Election to Biden and Then Takes It Back

Guess Who This Umbrella Girl Turned Into!

Ledisi Praises Jussie Smollett as Director, Vouches for His Character