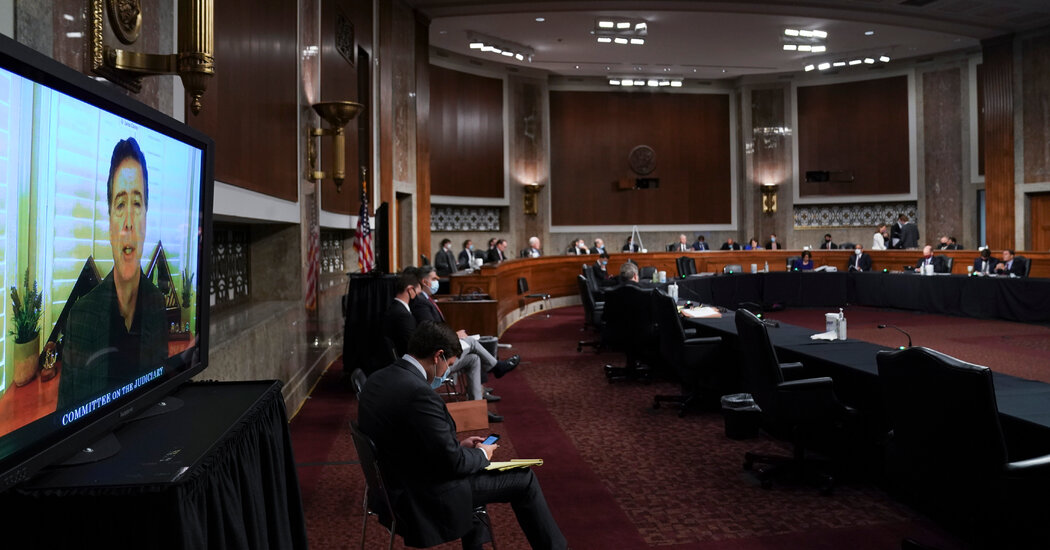 WASHINGTON — Senate Republicans sought on Wednesday to promote their efforts to rewrite the narrative of the Trump-Russia investigation before Election Day, using a hearing with the former F.B.I. director James B. Comey to cast doubt on the entire inquiry by highlighting problems with a narrower aspect of it.

Led by Senator Lindsey Graham of South Carolina, Republicans on the Senate Judiciary Committee spent hours burrowing into mistakes and omissions made by the F.B.I. when it applied for court permission to wiretap the former Trump campaign adviser Carter Page in 2016 and 2017. Republicans drew on that flawed process to renew their claims that Mr. Comey and his agents had acted with political bias, ignoring an independent review that debunked the notion of a plot against President Trump.

Mr. Comey, who testified by video from his home, rejected the Republicans’ conclusions and pointed to the findings of that review by the Justice Department’s inspector general, Michael E. Horowitz, who detailed the mistakes in the applications for permission to eavesdrop on Mr. Page but concluded that there was no evidence they stemmed from political bias.

“In the main, it was done by the book, it was appropriate and it was essential that it be done,” Mr. Comey said of the Russia inquiry.

But Republicans seized on dubious intelligence disclosed a day earlier by the Trump administration to accuse Mr. Comey of ignoring what they portrayed as a plot by Democrats to trick F.B.I. investigators into targeting the Trump campaign in the first place and then weaponize the inquiry on the campaign trail.

“I’m beginning to understand there was a two-tiered system here,” Mr. Graham said. “When it came to Trump, there were no rules, plow ahead, ignore everything, lie if you need to, alter documents. When it came to Clinton, it seems to be a completely different standard.”

The hearing was the latest action by Mr. Graham to undercut the Russia inquiry. Working with Attorney General William P. Barr and John Ratcliffe, the director of national intelligence, he has disclosed declassified records that cast investigators in a sinister light but that Democrats say are distorted selections.

Mr. Trump, who fired Mr. Comey in May 2017 after the F.B.I. director refused to say publicly that the president was not under investigation for his ties to Russia, promoted the attacks, writing on Twitter shortly after the hearing that Mr. Comey “should be arrested on the spot!” for defending the investigation. Hours later, he added that Mr. Comey was “a disaster who cheated and lied” and “should be tried for treason.”

Mr. Comey readily conceded that the applications were sloppy and testified that he would not have signed off on them knowing what he does now.

But he insisted that the wiretap of Mr. Page, a relatively junior aide who had left the campaign before the F.B.I. secured a court order to wiretap him based on suspicions about his ties to Russia, was a “slice” of the larger effort to determine whether Mr. Trump and his team were conspiring with Russia’s election interference operations. And he angered Republicans by repeatedly saying he could not remember details of the case.

“With all due respect, Mr. Comey, you don’t seem to know anything about an investigation that you ran,” said an irate Senator Mike Lee, Republican of Utah.

The hearing was the committee’s third in recent months to scrutinize the investigation, and Mr. Graham intends to call Mr. Comey’s former deputy, Andrew G. McCabe, to testify next week.

Mr. Graham, who is locked in his own unexpectedly tight re-election fight, insisted that he would keep going until “one of the most corrupt investigations in modern history” was exposed and officials involved were either “fired or go to jail.” A former F.B.I. lawyer has pleaded guilty to falsifying a document used in preparations for the warrant application. He was prosecuted as part of another ongoing review of the investigation, led by John H. Durham, a federal prosecutor Mr. Barr appointed.

During the hearing, Mr. Graham released a letter from the Justice Department, stating that an unnamed low-level department lawyer who had signed the warrant application also now regretted it and claimed the F.B.I. had withheld key facts.

Republicans were most animated by the F.B.I.’s use in the warrant applications of a dossier of unverified information compiled by a British former spy, Christopher Steele. Mr. Steele’s work was funded, in part, by Democrats, and it drew from information provided by a Russian source who Republicans said could have been spreading misinformation. Agents relied on the dossier in part to secure court permission for the Page wiretaps, while sharing few details with the court about its provenance.

But if Republicans had hoped to use Mr. Comey to score political points, Democrats sought his help backing up their criticisms of Mr. Trump and Mr. Barr.

Mr. Comey said he had “no idea what on earth” Mr. Barr meant by saying the F.B.I. lacked sufficient reason to begin investigating the Trump campaign. He accused Mr. Barr of acting “at odds with the nature of the department” to remain outside the political fray.

“When the attorney general starts acting like the personal lawyer for the president, it threatens that, and that is a priceless thing,” Mr. Comey said.

The former director also took on the most direct claim related to the investigation that Republicans have leveled against former Vice President Joseph R. Biden Jr., the Democratic nominee for president.

Mr. Comey denounced an unfounded assertion pushed by Republicans — including Mr. Trump at the first presidential debate on Tuesday — that in an Oval Office meeting in the final days of the Obama administration, Mr. Biden came up with the legal theory for prosecuting Mr. Trump’s former national security adviser Michael T. Flynn, who twice pleaded guilty to lying to the F.B.I. about his contacts with the Russian ambassador.

The Justice Department has released handwritten F.B.I. notes that Mr. Trump and his allies claim as supporting evidence. But former F.B.I. officials say Republicans are misrepresenting the notes and taking them out of context.

Mr. Comey, who attended the meeting, said that Mr. Biden had played no role in directing the investigation. “I would remember it because it’d be highly inappropriate for a president or vice president to suggest prosecution or investigation of anyone — and it did not happen,” Mr. Comey said.

Mr. Graham spent much of the hearing building his case around the unverified intelligence made public by Mr. Ratcliffe, in an apparent bid to help Mr. Trump politically. The years-old intelligence, rejected by other investigators, suggested that Russian intelligence officers had acquired information that Hillary Clinton had approved a plan for her 2016 campaign to elevate concerns about Mr. Trump’s ties to Russia.

Mr. Comey said he was not aware of the intelligence. “I have read Mr. Ratcliffe’s letter, which frankly I have trouble understanding,” he said.