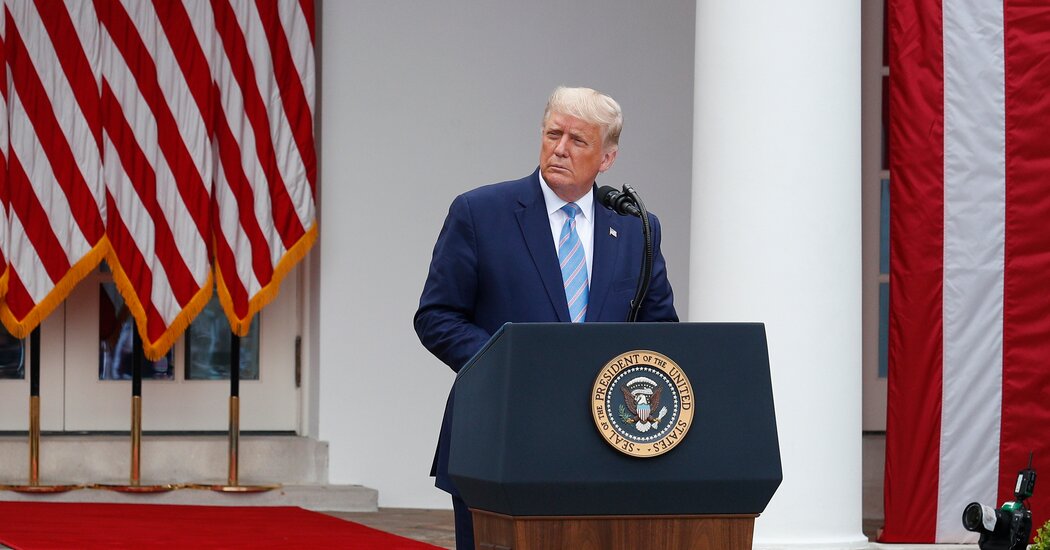 The Manhattan district attorney can enforce a subpoena seeking President Trump’s personal and corporate tax returns, a federal appeals panel ruled on Wednesday, dealing yet another blow to the president’s yearlong battle to keep his financial records out of the hands of state prosecutors.

The unanimous ruling by a three-judge panel in New York rejected the president’s arguments that the subpoena should be blocked because it was too broad and amounted to political harassment from the Manhattan district attorney, Cyrus R. Vance Jr., a Democrat.

“Grand juries must necessarily paint with a broad brush,” the judges wrote.

They concluded that the president did not show that Mr. Vance had been driven by politics. “None of the president’s allegations, taken together or separately, are sufficient to raise a plausible inference that the subpoena was issued out of malice or an intent to harass,” they wrote.

Mr. Trump is expected to try to appeal the decision in the United States Supreme Court. Mr. Vance has said that his office will not enforce the subpoena for 12 days in exchange for the president’s lawyers’ agreeing to move quickly.

Jay Sekulow, a lawyer for the president, did not comment on the ruling but indicated that Mr. Trump would ask the Supreme Court for an order that would delay enforcement of the subpoena until it decides whether to hear the case.

The president and Mr. Vance have been locked in a bitterly contested dispute since August 2019, when Mr. Vance’s office first subpoenaed eight years of Mr. Trump’s tax returns and other financial records from his accounting firm, Mazars USA. The subpoena is part of an investigation focused on Mr. Trump and his business practices. Mr. Vance has not revealed the scope of his office’s criminal inquiry, citing grand jury secrecy.

But prosecutors have suggested in court papers that they are looking at a range of potential crimes, including tax and insurance fraud and falsification of business records. They have said that the tax records are central to the investigation.

The subpoena also seeks accounting records and communications between the president and Mazars, documents that are typically used to build a criminal tax case.

The president’s argument against the subpoena hinged on a central assertion: that Mr. Vance’s entire investigation was focused on hush-money payments made in the final days of the 2016 presidential campaign to two women who said they had affairs with Mr. Trump. Michael D. Cohen, Mr. Trump’s former fixer and lawyer, helped arrange the payments.

The scope of the subpoena, the president’s lawyers argued, was far too wide for such a tailored inquiry. But the judges flatly dismissed that argument.

“The president’s bare assertion that the scope of the grand jury’s investigation is limited only to certain payments made by Michael Cohen in 2016 amounts to nothing more than implausible speculation,” they concluded.

“Without the benefit of this linchpin assumption, all other allegations of overbreadth,” they wrote, “fall short.”

The decision represents the fifth time that courts have rebuffed the president’s attempts to block the subpoena.

Mr. Trump has tried several arguments, first asserting last year that as a sitting president, he is immune from criminal investigation.

That question, which had never been tested in the courts, eventually ended up in the Supreme Court. In July, the justices issued a landmark decision rejecting the president’s immunity claim but saying he could challenge the subpoena on other grounds, such as its scope and relevance.

Mr. Trump did just that. But after losing again in the lower court in August, the president appealed to the U.S. Court of Appeals for the Second Circuit, which typically hears cases before three-judge panels.

The ruling acknowledged the “public status and visibility” of the president and the political interest in his tax returns.

The judges appeared to craft their decision with those sensitivities in mind, using dry language that was devoid of the colorful imagery that can mark high-profile rulings. The opinion also was issued in the name of the court without crediting an individual judge as its author, giving it the voice of an institution.

Mr. Trump has declined to release his tax returns to the public, breaking with 40 years of White House tradition, and has vigorously fought attempts by Congress and state lawmakers to obtain them.

It remains unclear whether the dispute over the subpoena will be decided before the Nov. 3 presidential election. In court, Mr. Vance’s office has accused Mr. Trump’s lawyers of using delay tactics, which the prosecutors say could end up allowing the statute of limitations to expire on any possible crimes and effectively grant Mr. Trump the immunity to which the Supreme Court ruled he was not entitled.

The president’s lawyers have disputed that characterization. “Our strategy seeks due process,” Mr. Sekulow has said.

Even if Mr. Vance’s office obtains the president’s tax returns, they will be shielded by grand jury secrecy unless Mr. Vance brings criminal charges and the documents are introduced in court.

A recent New York Times investigation, based on more than two decades of confidential tax-return data for Mr. Trump and hundreds of his companies, showed that he paid no U.S. income taxes in 11 of the 18 years that The Times examined. He paid only $750 in both 2016 and 2017.