Buy Skyworks Solutions As They Profit With 5G Rollout

Skyworks Solutions (NASDAQ: SWKS) provides the chips inside Apple iPhones for 5G (NASDAQ: AAPL). While Apple has noted that handset sales are leveling, the eventuality is that there will be continuous sales of these items over the years as handsets continue to become obsolete and individuals replace these handsets over time. This will represent continued revenue at Skyworks. The 5G rollout is largely just beginning. Given these variables, Skyworks is a solid candidate for playing the 5G rollout and profiting from it.

Here is a look at the 5-Year chart on Skyworks Solutions: 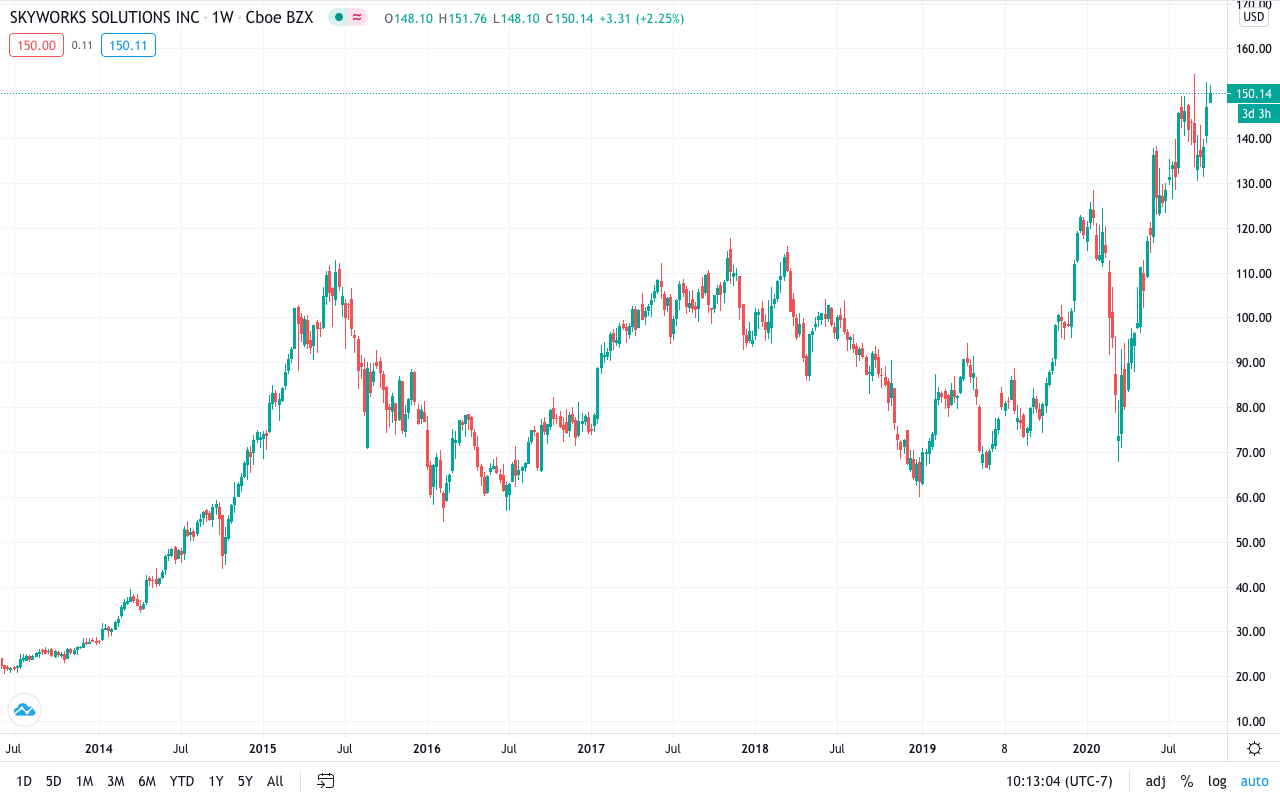 Over the past five years, Skyworks Solutions has risen 78%. The company’s stock has seen a large increase in its move higher since the March COVID-induced sell-off. With the Federal Reserve’s moves to lower interest rates to near zero, as well as expectations of an additional stimulus package coming from Washington, this has helped to push stocks up higher over the past few months.

Here is a look at the Nasdaq Index for the same 5-year period: 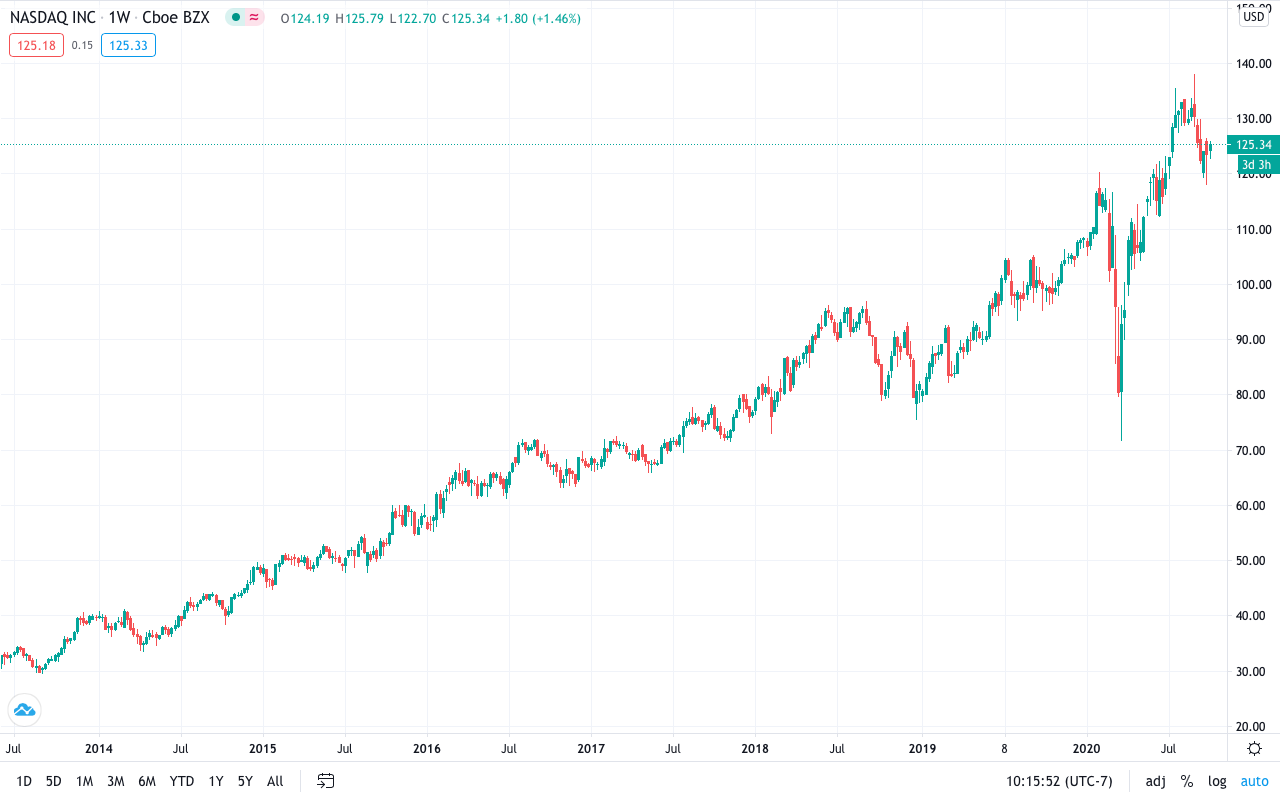 The Nasdaq Index has risen steadily over the past few years, hitting some 138% increase in the past 5 years. But, there has been a much larger rise in the rate of increase recently, especially since the March, COVID-induced sell-off.

5G rollout has a significant way to go

5G is the next generation of mobile phone service. There will be faster service provided to users with slower latency, as PC Mag explains it:

5G brings three new aspects to the table: bigger channels (to speed up data), lower latency (to be more responsive), and the ability to connect a lot more devices at once (for sensors and smart devices).

So far, companies involved in building the infrastructure for 5G have focused primarily on larger cities and urban areas. The reason being is simple: 80% of the nation lives in an urban area. Therefore, building one tower in an urban area affects more individuals with erecting a 5G tower than placing one in a suburban or rural area. So far, only a few select cities have seen large-scale rollouts; many cities have yet to see these infrastructure projects begin. The whole process will take several years just to get the infrastructure ready. Then, the next steps are the sales of the devices to individual users and the software to run the apps on this platform.

On the one hand, Skyworks sells microprocessors that enable the speed of 5G in iPhones. That’s excellent news if you are providing the infrastructure of such a ubiquitous product. On the other hand, here are the sales of iPhones over the past 12 years: 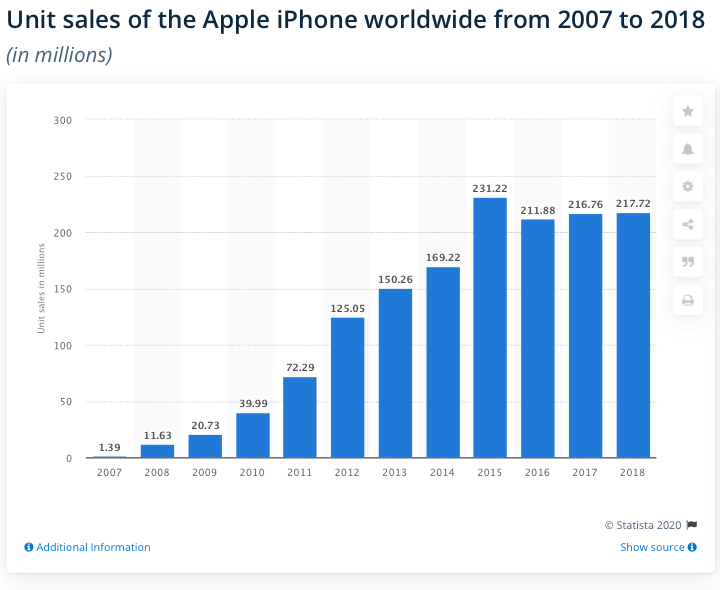 As you can see from the chart, revenue from sales of iPhones has peaked from previous highs and has largely flatlined over the past couple of years. Also of note, there was a 10.1% decline in unit sales for Apple in 2019. But, as it turns out, Apple sold only 18% of the worldwide smartphones last year. However, the company laid claim to 87% of the profits derived by smartphones.

The read on that is that iPhone margins are larger than other smartphones. And, the components that power 5G phones are more expensive and have more margins in them than previous generation phones. So, while the total number of iPhone sales may be flat YoY, the margins are higher. This will continue to help Skyworks through the years moving forward as more and more individuals continue to switch over to 5G.

I believe that getting into Skyworks is a long-term play. The 5G rollout is going to be with us for a few years, and these early years are going to be more lucrative than the latter years. Companies focusing on the 5G rollout are more focused now where their immediate efforts are going to see the biggest results. This means that as the providers of 5G offer more and more immediate coverage in urban areas quickly, there will be larger demand for products that use the 5G networks.

However, as was mentioned, Apple sees future sales of its handsets slowing more and more. The company believes that the rate of growth of their handset sales has peaked. Given that, Apple is focused more on sales of apps and services. Skyworks provides the infrastructure for the devices. So, while customers will slowly switch over to 5G handsets, Apple’s profit focus is more on services and the sales of apps. This could potentially be a negative for Skyworks as Apple does not place its focus on the direct item that Skyworks provides. And, it may take up to 5 years for full integration of a large percentage of individuals drawing out sales for handsets.

Another downside risk I see, one that has brought a lot of uncertainty to the markets, and by consequence, selling, is the upcoming election, and also, now, the virus and the President of the United States contracting it. If you look at the chart for the Nasdaq Index above, on September 2nd, the Nasdaq hit an all-time high then immediately dropped a significant percentage. This was attributed to the upcoming election and its possible outcome. Also in play now is the fact that President Trump has contracted the COVID virus along with a number of key individuals around him. And, yet a third drag on the market has been Congress’s lack of ability to pass a second stimulus package, one that the market is certain will happen but keeps stalling along.

Given the political uncertainty, at any time, more concerted selling in the broader index market may ensue. This could drag down Skyworks’ stock. So, an entry into this stock at this price could potentially see future selling if news starts to head south. I have been writing consistently over the past few weeks regarding the selling in the broader index. I believe these concerns are well-warranted and these concerns still exist in the fore. And, I have been reluctant to make any moves until the election has transpired. I believe that is a prudent move that should be heeded.

I am a big proponent of 5G and what it is going to offer users. Given this, the companies that are involved in the process are going to see continued revenue as the nation builds up the infrastructure. Skyworks, through its sales of chips to Apple, is part of that infrastructure process. I believe the company will profit from this moving forward over many years’ time. However, I am also a believer that there may be some future selling in the market with uncertainty over the upcoming presidential election. This may bring in volatility into the markets and because of that Skyworks’ stock may sell-off in the near future. However, I see this as a buying opportunity. I am bullish on this stock, albeit, I have no positions on the company. I await a better entry price.

Are You Ready to Be Coached?

Key Words: The stock market has put in a top and an ‘enormous’ bubble has already burst, says David Einhorn

: Lithium is at the heart of the electric-vehicle revolution — here’s how the market for the raw material works

The Moneyist: My parents gave my brothers and me $8 million in bonds, stocks and ETFs. I’d like to use my profit to travel. My parents refuse