In a signal of just how volatile the high-growth tech sector has become, Fastly (FSLY) has become the latest domino among stock market darlings to take a huge fall. The content delivery network (CDN) has been an investor favorite all year, due to two factors: firstly, Fastly benefits proportionally alongside supercharged internet usage amid the pandemic, and secondly, investors saw Fastly as one of the only ways to gain exposure to the fast growth of TikTok, which is a major Fastly customer.

It’s the second piece that is now causing Fastly tremendous pain. In a rare announcement that says Fastly will be unable to meet its guidance targets for Q3 (when all year long, most tech companies have been obliterating guidance outlooks, especially those directly tied to the surge in internet usage), Fastly blamed its “largest customer” (which it had previously disclosed as TikTok) for the expected revenue shortfall. Shares promptly crashed ~30% as a result in after-hours trading:

Fastly’s latest downward move has confirmed my earlier thesis: that the stock is a good company trading at a terrible price, with a major headline risk in TikTok.

Unfortunately for a stock like Fastly – which relies a lot on “FOMO” momentum and speculative trading action – a rare revenue miss like this will put Fastly in the penalty box for quite some time. And in my view, with shares of Fastly already trading richly (even after the ~30% fall), Fastly is ripe for a continued correction – something that may spill over into other richly valued internet stocks as well.

In this article, we’ll parse through Fastly’s latest announcement and what it may mean beyond Q3, but my viewpoint on Fastly has worsened to a very bearish stance: not only does Fastly have plenty of gains to give up (the stock is still up ~4x this year after the drop), but a peel-off in one of Fastly’s biggest customers in a very competitive CDN landscape could spur more defections from customers and dramatically hamper Fastly’s vaunted growth rates.

In my view, Fastly only becomes attractive again if the stock falls to a ~15x revenue multiple (more on valuation later), which implies a $60 price target. While this may sound like a ludicrous drop for the stock, note that this was where Fastly was trading only four months ago in June, before animal spirits took the stock up to the $100s.

The guidance cut, and the questions it raises

Here’s what Fastly announced in lowering expectations for the fiscal third quarter:

In the statement accompanying the release, CEO Joshua Bixby noted as follows:

The current global environment has in some ways fueled our business, but has also created areas of uncertainty. While our preliminary third quarter results reflect the challenges of a usage-based model, we believe the fundamentals of Fastly’s business remain strong, as does demand for our platform.”

Fastly’s new revenue range now implies a 41-44% y/y growth, versus 48-52% y/y previously. The guidance cut represents, at the midpoint, a ~5% reduction in overall revenue and eight points of growth lost.

As previously mentioned, the “previously disclosed largest customer” referenced here is TikTok. The sudden announcement, however, does raise a few key questions.

First: everything we’ve heard so far about TikTok is that usage is through the roof. The “uncertain geopolitical environment” that Fastly is referencing here, i.e. the forced transfer of TikTok’s technology to a U.S. company, has done little to actually impede usage of the product. Users have barely noticed the back-and-forth, as a judge blocked President Trump’s proposed ban of the app in September.

In early October, a Piper Sandler research report also announced that TikTok had surpassed Instagram as teenagers’ second-favorite app, behind Snap (SNAP) (Instagram still remains #1 in terms of usage; the survey was based on app preference). In early September, TikTok itself for the first time released user statistics, noting it had crossed 50 million DAUs and 100 million MAUs in the U.S. alone.

The key message here: TikTok itself doesn’t seem like it’s slowing down. So does Fastly’s guidance cut really mean that TikTok is now giving more business to other CDNs?

The magnitude of TikTok’s guidance cut certainly suggests that this is the case. If the ~5% revenue cut was due to TikTok (~12% of the business) alone, that would mean TikTok’s usage would have to be down by about 50% – not something we can fathom for the app alone. Either TikTok gave more business to competitors, or other customers alongside TikTok have slowed down their usage.

This raises a secondary question: just how much is competition now weighing on Fastly’s growth?

Gartner Peer Insights – a great review site for comparing different tech vendors in various areas – lists more than a dozen alternatives, many of which are much larger and well-capitalized companies, and some of which have earned higher than Fastly’s average 4.4/5 star rating: 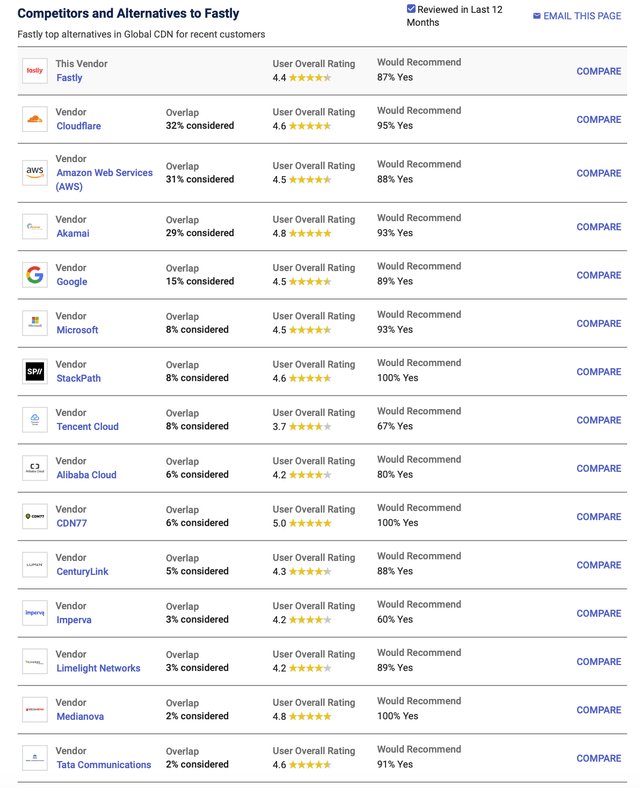 At the end of the day: I view content delivery networks to be a commoditized service. These companies are effectively middlemen between website operators and their traffic, making sure content is delivered quickly and at high quality. While a necessary service, there isn’t much distinction between the competing services that can give Fastly a sustained, multi-year advantage over its competitors.

Fastly’s share price stabilized around $89 in after-hours trading after the guidance revision. This would put Fastly’s market cap at ~$9.31 billion, and its enterprise value at $8.96 billion, after netting off the $384.0 million of cash and $30.0 million of debt on Fastly’s most recent balance sheet. That, in turn, represents a valuation multiple of 22.8x EV/FY21 revenue against Wall Street’s current FY21 revenue consensus of $392.6 million, or +33% y/y (a number that may continue to fall over the coming days as analysts adjust down their estimates to account for Fastly’s current-quarter slowdown). To me, this is far too rich a multiple for a stock that:

As mentioned at the beginning of the article, I think a $60 price point (15x EV/FY21 revenues) is the level at which I’d want to take a serious look at going long on Fastly. Given the speed of Fastly’s drop post-guidance revision, and given that Fastly was trading at the $60 range less than two quarters ago, we may reach those levels relatively quickly. Until then, remain on the sidelines.

For a live pulse of how tech stock valuations are moving, as well as exclusive in-depth ideas and direct access to Gary Alexander, consider subscribing to the Daily Tech Download. For as low as $17/month, you’ll get valuation comps updated daily and access to top focus list calls. This newly launched service is offering 30% off for the first 100 subscribers.