Preferred Bank: The Valuation Is Too High For Such A Negative Credit Profile

Headquartered in Los Angeles, California, Preferred Bank (PFBC) is a $5.0 billion asset bank you have probably never heard of unless you live in the southern California region. The bank has 13 branches, 11 of which are located throughout the Los Angeles area, most of which are in the northern part of the city, just east of downtown. The other two are located in San Francisco and New York City.

Similar to both East West Bancorp (EWBC) and Cathay General Bancorp (CATY), Preferred has a pretty rich history of being a bank that was originally founded as being a Chinese-American focused lender.

When I think about PFBC, I recall the bank being on the cusp of not surviving the last recession. As one can see from the last couple of charts, credit is once again starting to deteriorate at a fast pace. While I am nowhere near under the assumption that the bank is going to go down the exact same path as 2008, I am rather bearish on the shares at these current valuations.

Most peer banks are typically trading closer to 1.0x to 1.1x on price to tangible book value. While PFBC is trading in a similar range, it has a much worse credit profile, and in my mind, should warrant a much lower valuation. Until the market can string together a couple of consecutive quarters of positive economic growth, I believe PFBC should trade below tangible book value per share.

The second quarter net interest income came in at $42.2 million, which compares to $41.8 million in the first quarter. While the overall balance sheet growth helped spread income, there was a slight deterioration in the margin which played a mitigating factor to overall results. In the second quarter, the net interest margin (NIM) experienced a 13 basis point drop to end the quarter near 3.57%, which compares to 3.70% produced in the first quarter.

The biggest contributing factor to the overall NIM deterioration was the sizable imbalance from the overall liquidity levels. The bank experienced a sizable amount of deposits in the quarter, far outpacing the loan growth rate. While the costs of deposits have decreased, its overall level has continued to climb, which will put additional pressure on the margin until the remaining balance is deployed into a working asset.

While most banks typically have about a fourth of their total revenue come from noninterest income, PFBC has had less than 4% for the first two quarters of the year. While fee income is obviously not much of a factor, it was down slightly linked quarter. The slightly lower fee income line was entirely made up of from the sale of securities which carried a loss. 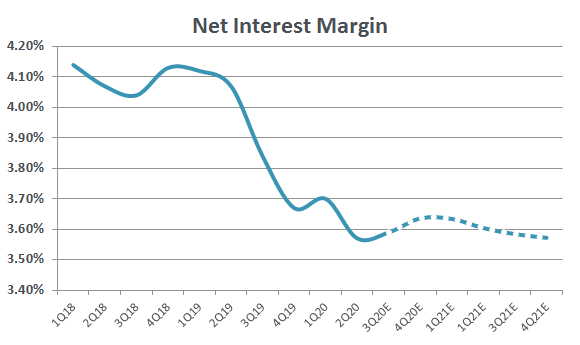 While I am not expecting any additional downside in the NIM, it is difficult to see a scenario in which it increases materially. While most banks are likely to see the second quarter of 2020 as being the NIM bottom, I don’t believe that will be the case for PFBC.

Going forward, I believe the margin is likely to hold steady near current levels while overall revenue stays consistent. For PFBC, the current revenue line item is basically a “what you see is what you get” type of modeling outcome. By that I mean the results just experienced in the second quarter are likely to be very similar to results for the upcoming quarters and years.

When reviewing the chart below, readers should understand why I have such a negative stance on the bank given its current valuation. PFBC had a pretty painful experience during the last recession and was on the cusp of not surviving. It even has a 1:5 reverse stock split to help the overall share price be more attractive to institutional investors. 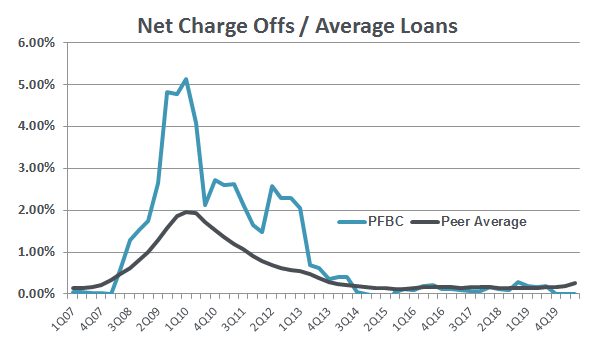 The provision expense in the second quarter was $7.5 million, which compares to the first quarter results of $5.3 million. While CECL undoubtedly played a factoring in the linked quarter increase, the chart below is what causes me the most concern for the bank going forward. 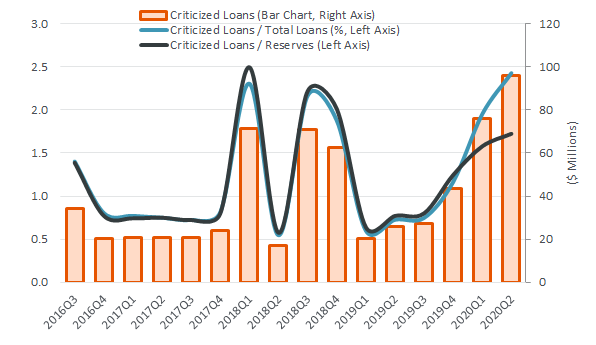 As one can see from the chart above (in the orange bars), criticized loans continue to climb rather quickly. On a relative basis, it amounts to less than 2.5% of total loans, however, when compared to the reserve, it is about 1.75x. While technically below my 2.0x threshold, the rate at which it is increasing, even with the sizable provision additions is what causes me concern.

At the end of the second quarter, the bank had 11.8% of loans in deferral, however, most importantly over 16.5% of its commercial real estate portfolio is in deferral. While I would expect that to work lower over time, I do believe PFBC is likely to see additional increases in its criticized loan levels during the third quarter and beyond. Driven by this continued increase in criticized loans, I am expecting overall provisioning levels to remain high and profitability to be muted.

From my experience in working for a regional bank, I know how difficult it is to change the lending behavior at a bank through its underwriting policies. Bankers are paid to make loans, while the credit review committee has to make sure those loans are structured properly and don’t go bad.

Since PFBC just barely survived the last economic cycle, it’s hard for me to give them a pass on credit since the previous four years have been pretty solid. When looking at the Los Angeles loan concentration and Loan to Value metrics, I am a little skeptical of the overall “value” used for the underwriting standards.

If the market starts to see negative valuation growth (i.e. buildings are being sold for less than they were last year), it would call into question the entire portfolio’s red line covenants of mandated equity held by the borrower.

While I don’t think PFBC is likely to experience the credit pain it did in the last recession, I do believe it will fare worse than the average peer bank. In my mind, increased NCOs are going to cause elevated provisioning levels for the foreseeable future which is likely to put a lid on share price upside.

Despite Trump’s claims, the Dept. of Defense doesn’t plan to lead vaccine distribution

Stablecoins went wild in the days before Bitcoin’s recent surge