USD/CHF Remains Weak, But The Pair Could Fall Further As CHF Holds Firm As A Global Safe Haven

The USD/CHF currency pair, which expresses the value of the U.S. dollar in terms of the Swiss franc, was already falling as we headed into 2020. While USD was able to retrace slightly higher through January, the emergence of COVID-19 and the ensuing economic crisis sent USD into a spiral of volatility, falling from the 0.98 handle to the 0.92 handle, and then back up again, before proceeding to drift lower. Today, USD/CHF trades at the 0.91 handle.

Traditionally, USD has gained through crises. The U.S. dollar is branded as the world reserve’s currency, the operative word here being “the”. There are after all many different reserve currencies across the world. The euro is another, yet the euro represents only about 20% of central bank reserves, whereas the U.S. dollar remains the preference (representing about 60% of FX reserves). For more information, see the BIS’ report on FX reserve composition.

The yuan represents only about 2% of FX reserves (pictured). Yet CHF represents even less, at just 0.15% (too small of a fraction to be visible in the pie chart below). 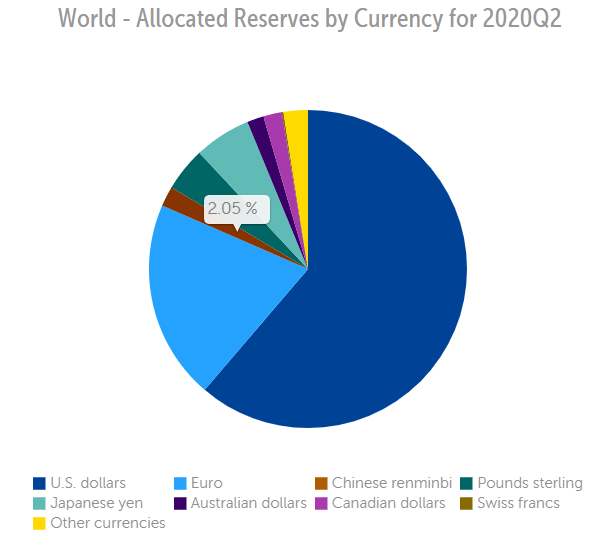 What the Swiss franc has is relative political stability (certainly in the face of growing civil unrest in the United States this year). It also has a current account surplus, which is a generally accepted characteristic of FX safe havens (including the Japanese yen). This is an interesting factor since CHF strength naturally punishes the current account (making exports pricier in international FX terms, while making imports simultaneously cheaper). Yet Switzerland continues to operate in a current account surplus.

Note that the current account was only positive by about CHF 10 billion in Q2 2020, which certainly suggests the impact of a stronger CHF on the current account. This would lend support to the idea that CHF strength is probably limited going forward, however it does remain historically strong at present.

Switzerland’s currency also finds strength on the back of short-EUR trades. CHF serves as the safe haven of Europe, and the smaller size of Switzerland relative to the euro area means that long-EUR and short-EUR regimes tend to have a disproportionate effect on CHF market valuation. With the Swiss franc serving as a favored alternative to the euro, any tepidity across Europe can punish the Swiss economy through aggressive flows into CHF.

CHF rates have been negative for years, while USD rates are at least still positive. Yet the collapse in U.S. rates to the ‘zero lower bound’ this year have clearly been CHF-positive on an interest rate spread basis. Swiss inflation rates also sometimes dip into deflationary territory (negative inflation). While deflation (or otherwise low inflation) can reduce the prospect of interest rate hikes, it also increases real yields (inflation-adjusted interest rates). If the real yield is the nominal yield minus inflation, a negative inflation rate is going to send the real yield above the nominal yield, making the currency technically more attractive.

The table provides an overview for 2020 for USD/CHF based on changes in interest rates and inflation rates for the United States and Switzerland.

As shown above, the real implied yield has worsened for USD/CHF this year materially by 140 basis points (between January and September 2020). This has resulted from deflation in Switzerland (in combination with an unchanged albeit negative interest rate), while U.S. rates have dropped considerably (the midpoints of the target rate ranges are used above) from circa +163 basis points to circa +13 basis points (the midpoint of 0.00-0.25%). Inflation in the United States has also fallen by over 100 basis points. The effect on the real yield strengthens the case for short-USD/CHF positioning.

However, USD/CHF is already trading almost 6% below the year’s open price (this year’s low was almost 7% below the open price). How much lower could the pair trade? Another longer-term model is Purchasing Power Parity, which values a currency’s relative purchasing power internationally. Using the OECD’s model data, I construct the chart below with 30%-delta bands (in relation to the rolling annual PPP fair value estimation; 2019 is the most recent year).

Notice from the above chart that USD/CHF traded close to fair value in the early 2000s. Yet since then, CHF has traded very firmly against USD. In part this has been helped by a gradually falling fair value, a trend that has strengthened the CHF bias. Strengthening this bias further has been euro skepticism, which really picked up after the global financial crisis from 2008. The European debt crisis which began from late 2009 also helped to strengthen the short-EUR bias. All of this lent to a stronger CHF, even against USD.

Since Swiss inflation remains low (currently negative, in fact), we can expect to see the PPP-implied fair value to either hold or fall. Therefore, the current price for USD/CHF actually looks historically strong, despite the fact that the Swiss franc is technically overvalued relative to USD.

I recently wrote about this persistent problem of the Swiss franc, and frankly (pun unintended), it would appear that without aggressive intervention from the SNB, this trend is probably going to continue.

Political unrest and/or a contested election in the U.S. this year, coupled with a second wave of COVID-19 into the winter months, lends to stronger safe havens (in the FX world) in the short- to medium-term. Meanwhile, deflation in Switzerland strengthens the trend towards a lower USD/CHF rate alongside a falling fair value price (even if the fair value remains higher than the market price). Swiss deflation also contributes to a stronger real yield; lower U.S. rates achieve the same, while also eliminating the speculative appeal of the long-USD/CHF carry trade.

Therefore, while we can look to USD/CHF and estimate that CHF is probably overvalued (which is in fact an especially impressive fact considering that USD mostly enjoys a premium against other major currencies, owing to its ‘world reserve currency’ status), further downside for this pair is probable in the short- to medium-term (in line with my previous assessment). USD/CHF “should” trade higher, but normative statements mean little in this context. Perhaps the most important “node” to watch in this “network” is the Swiss National Bank. While the SNB doesn’t want to be labeled as a currency manipulator by anybody, sooner or later it may have to enjoy the label.