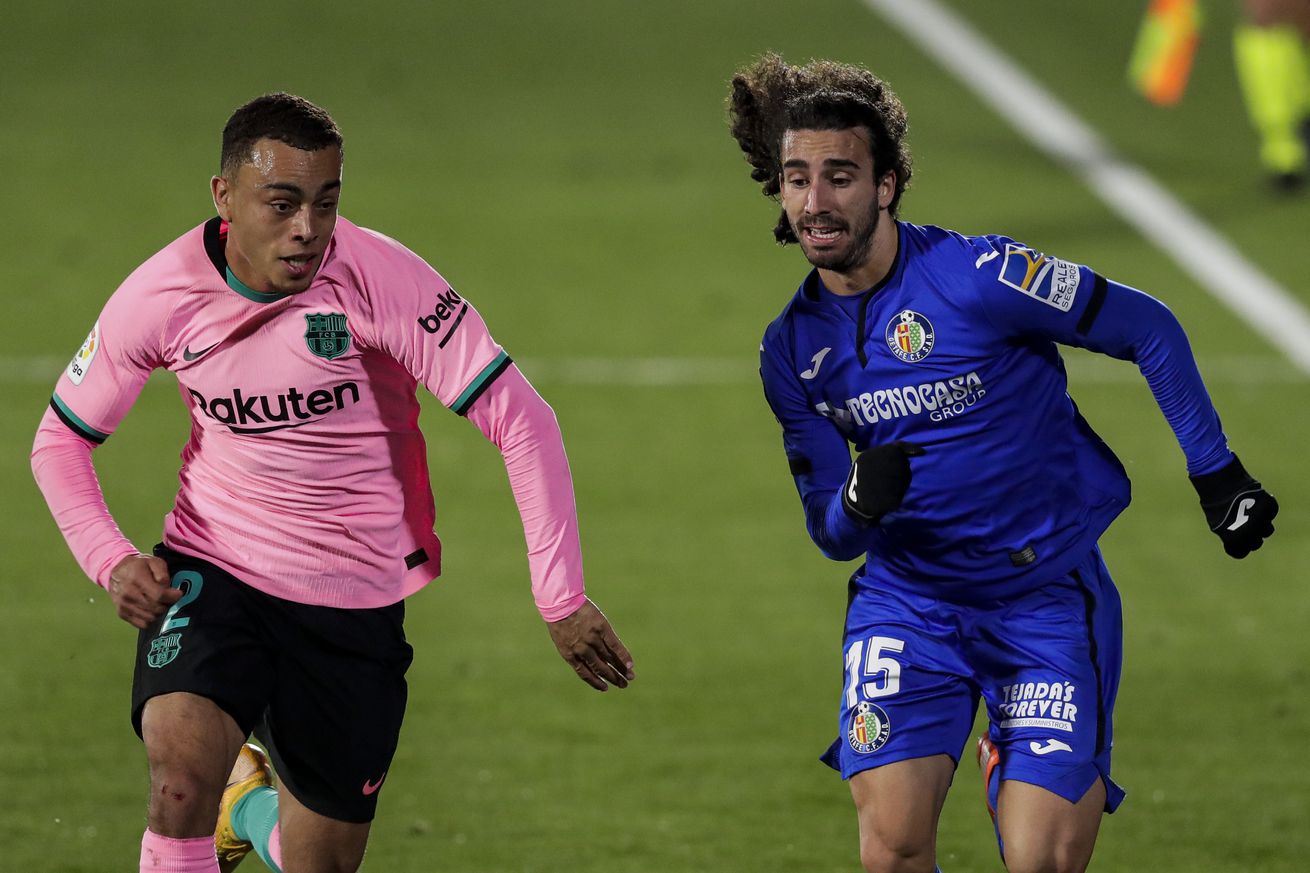 Ronald Koeman’s unbeaten run is over

Koeman has work to do after first defeat

Ronald Koeman had got off to a fine start with two wins and a draw in his first three games in charge, but Saturday’s defeat showed he has plenty of work to do at the Camp Nou.

The Dutch coach did rotate his starting XI a little with Pedri, Ousmane Dembele, and Sergino Dest coming in, while we also got a rare glimpse of Riqui Puig late on.

Yet Koeman admitted after the match “it was not good enough today” and he was quite right too. The team struggled to create chances and offered little response to going behind to a pretty soft penalty.

Barcelona attempted just one shot on target in their 1-0 defeat to Getafe.

They failed to hit the target in the second half at all. pic.twitter.com/tYVqGBEIcR

The boss tried to change things by bringing on Ansu Fati, Philippe Coutinho, Puig and even Martin Braithwaite but that didn’t work either and Getafe wasted chances late on to extend their lead.

Some really tricky fixtures await in the coming weeks, and Koeman will be well aware that big improvements are needed if Barca are to beat Madrid and Juve.

There were some positives from Saturday’s match and the biggest was surely the performance of 17-year-old Pedri on his first La Liga start for Barcelona.

The teenager showed no signs of nerves, looked a class act on the ball and set up Antoine Griezmann for a chance the Frenchman really should have buried in the first half.

Pedri didn’t seem bothered by Getafe’s physical approach at all and drew praise from Koeman after the match who said he showed “he has the quality to play for Barcelona.”

Koeman already seems to have plenty of faith in Pedri, and on this evidence we can expect to see plenty more of the teenager this season.

Talking of teengers and debuts there was also a first start for Sergino Dest who slotted in well at left-back in place of the injured Jordi Alba.

The 19-year-old enjoyed a decent full debut and seemed to enjoy his duel with the combative Allan Nyom.

Dest showed enough to suggest he could continue at left-back instead of fit-again Junior Firpo while Alba is out, even though his preferred position is on the opposite flank.

While the teenagers were offering plenty of optimism for the future it proved another tough night for Dembele and Antoine Griezmann.

It was a pleasant surprise to see Dembele finally in the starting XI, and for the first time in 11 months, but the lack of games really showed on Saturday.

Dembele lost too many balls, looked to be holding back at times (and who can blame him after so many injuries) and eventually made way for Ansu Fati on the hour.

The Frenchman’s lack of form can be explained by his lack of game time, while there’s no such excuse for Griezmann who struggled again despite being played centrally.

Indeed the World Cup winner blazed over a great chance when clean through and still has not scored this season for Barca. The question now is will Koeman keep faith in him?

It won’t have gone unnoticed at Barcelona that one of the brightest players on the pitch on Saturday was a certain Marc Cucurella.

The 22-year-old seemed to thrive against his former team, showing all the intensity that the visitors were lacking in their play at times.

Cucurella has already made it clear he feels he never got a proper chance at Barcelona before eventually being sold to Getafe to help balance the books.

Jord Alba was the main reason why Cucurella didn’t get minutes at the Camp Nou, but he tends to play higher up the pitch these days and you can’t help wonder what might have been.