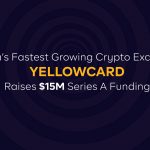 Chris Maurice (CEO) and Justin Poiroux (CTO) are the founders behind Yellow Card and have since grown it to become a Pan-African cryptocurrency exchange operating in 12 countries. The Atlanta Georgia headquartered company launched in Nigeria in 2019 offering a bitcoin card model. It later pivoted towards an agency banking model. Here the agency banks involve the delivery of essential financial services to customers through third-party agents. It has also remained instrumental in the financial inclusion in Nigeria and several other African countries.

In countries where Yellow Card operates,  people are allowed to buy crypto by making ATM deposits, bank branches, and partner store networks. The company generally offers cash in and cash out depending on what’s applicable in the country. On Forbes, Maurice reveals that the big picture is to reveal how money moves around the continent through crypto. Yellow will build an infrastructure capable of integrating partners across the continent.