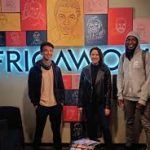 South Africa mobile gaming Carry1st, to partner with AfricaWorks a pan-African coworking company to establish a gaming development hub at the AfricaWorks Cape Town branch. The place is situated on the 14th floor of AfricaWorks 7 Bree Street.

The area is strategically placed at the heart of Cape Town and offers flexible and collaborative workspaces for startups, multinationals, freelancers, remote teams, and startups. Carry1st was founded by Cordel Robbin-Coker, Lucy Parry, and Tinotenda Mundangepfupfu in 2018.

Carry1st now serves as the world’s fastest-growing mobile market. We earlier covered their 2020 raise of $2.5 million in a round led by  CRE Venture Capital which raised their overall funding to $4 million.

In 2019, the startup launched its much hyped Africa’s first Super App. In April 2019 Carry1st Trivia was the top game downloaded in Kenya and Nigeria for the most part of the year with over a million and a half downloads by then.

Gregoire Schwebig (CEO AfricaWorks) described AfricaWorks as “a quantum leap towards expanding our reach across the continent.”

The post Carry1st to set up Game Development Hub in Cape Town appeared first on Tech In Africa.