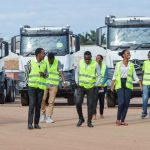 The company looks to drove down the cost of transport for SMEs by connecting businesses to truck drivers through technology that facilitates the smooth running of business operations increasing revenue, motility efficiency, and performance. This platform largely services the urban, peri-urban, and rural in Kenya, Tanzania, and Uganda.

In a 2019 feature by Anzisha, Ridelink Head of Operations Daniel Mukisa disclosed how the company pivoted its business model from a B2C to a B2B model which helped the company grow its revenue significantly. The company had realized a 300% revenue growth from 2017’s $37,000 to 2018’s $140,000. The recent investment raises Ridelink’s cumulative funding to $250,000 after receiving private investment in 2020 from Seedstars.

Speaking on the investment, Thokoza Mjo Head of the Anzisha Prize Fund said that The Young Entrepreneurs Fund works to incentivize co-investments in its graduate programs. Kenneth Legesi CEO at Ortus Africa Capital pointed out that co-investing alongside Young Entrepreneurs Fund while “backing African entrepreneurs with local capital” helps them grow while giving confidence to other investors to do the same across the continent.

Ridelink was founded in 2017 as an e-logistics platform connecting SMEs to a wide network of operators. The company has served over 250 SMEs alongside 2000 drivers delivering cargo across East Africa.

Ridelink has also qualified as one of the 2021 Africa’s Business Heroes Top 20 Finalists in a showcase of Uganda’s enterprenurial brilliance as they lead the charge for democratizing logistics for small businesses. More on the ABH Top 20 finalists is captured here.