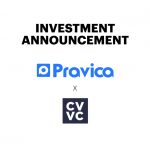 Mohamed Abdou, Pravica CEO said that the company is “reinventing digital communication protocols by utilizing Stacks Blockchain and its smart contracts” with the intent to “engineer a tamper-proof decentralized identity” secured on Bitcoin’s network as a fully decentralized storage system.

The investment came ahead of the first cohort demo day by Stacks Accelerator where Pravica was one of 25 shortlisted startups. Pravica remains in a strong position to scale its operations and continuously expand its messaging app to all users.

Pravica is a revolutionary communication tool specifically messaging apps for enterprises where data breaches are recorded by the most popular communication apps worldwide. End of FY 2022, Pravica is looking to onboard over 5,000 enterprises with an average of 500,000 combined users. The app is built on Blockchain, secured by blockchain design which provides unparalleled privacy and security changing the encrypted communication industry.

CV VC invests in revolutionary blockchain technology. It focuses on global teams building applications at the intersection of what it terms as ‘Technology for Tomorrow’ (T4T) across six industry verticals including Security & Identity.

Pravica & Wise now available on both #IOS and #Android

Download now for a secure and private messaging app.

Built on @stacks secured by #bitcoin