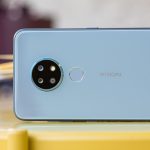 TechInAfrica –  Launched recently in Kenya is Nokia G10 as part of the G-series.

Available in all retail stores in the country, G10 is designed for high-profile users who spent the majority of their time on their smartphones.

Here are the specifications of the smartphone:

According to Nokia, the smartphone’s battery could withstand to 3-days with in-between charges. The company also promises a 3-year occasional security updates.

The smartphone is purchasable starting from Ksh. 14,500.