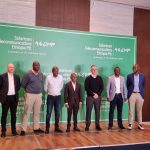 Safaricom Ethiopia will carry out a countrywide staff recruitment drive where it will introduce its leadership team while affirming its commitment to investing in the country’s digital future ahead of the commercial launch.

The development was announced by Mr. Peter Ndegwa (CEO) who led a senior delegation from the Global Partnership for Ethiopia who affirmed their commitment to shareholders by investing in Ethiopia while contributing to the achievement of the country’s obligations. He thanked the government of Ethiopia for allowing the Global Partnership for Ethiopia and other key partners for supporting the initial preparations for their commercial launch describing the partnerships as the “building blocks of digital transformation.”

M.D of Safaricom Ethiopia Mr. Anwar Soussa, gave updates on the preparation for commercial launch, pointing out how the company has started recruitment for Ethiopian nationals for technology, commercial and corporate functions.

Over 450 graduates will be recruited by the company as part of the Discover Graduate Management Programme and undergo learning rotations on different functions of the business as well as extensive leadership, coaching, and mentorship. The company also confirmed 11 members of its Executive Committee (ExCo).

.@AnwarSoussa Today, I would like to introduce you to some of our Executive Committee (ExCo) team who will steer the company in the implementation of our digital transformation strategy in Ethiopia.#SafaricomInEthiopia #DigitalEthiopia pic.twitter.com/FMiGGdi3Dg

The post Safaricom Ethiopia racing towards a commercial launch appeared first on Tech In Africa.