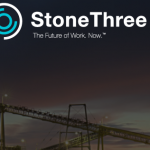 The company has primarily bootstrapped through its operations and shareholders. According to Derick Moolman the CEO, Stone Three partners with the firms that built the world of today through “actionable insights” and “sustainable business value from data.”

Stone Three was founded in 2000 by Francois Swanepoel and Dave Weber as a company that creates high-end signal processing solutions designed to solve real-world engineering problems. Despite the steady growth the first business focus aimed at building an enterprise software development house. Moolman and his partners later joined in 2017  and led the tranformative strategy of AI augmented solutions geared to a world where humans are safer, healtheir and more productive. The building blocks for the next phase is a strong client base, cohesive inter-disciplinary team, and exceptional technological assets.

This helped Stone Three  to stand out as a preferred supplier for respected, industry multinationals embracing Industry 4.0. AI and Machine Learning in mining and manufacturing.Stone Three offers unique patented industrial solutions in addition to a highly qualified team and new funding from Knife Capital.

Knife Capital CEO Keet van Zyl described the partnership with the company as a “trust relationship” based on a previous successful exit with Derick and CSense. Derick previously ran an analytics startup CSense that was acquired in 2011 by US company GE Intelligent Platforms.