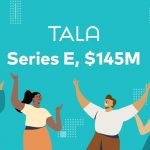 As per a Forbes article, Tala CEO Shivani Siroya used her prior UN experience to found the fintech company in 2011 to offers loans to the underbanked in the Philippines, Mexico, India, and Kenya. In mid-2020 Tala launched a debit card in Mexico as the coronavirus epidemic prompted the need for such an approach.

In May 2021 Tala announced a partnership with global payments giant Visa and crypto company Circle. This would allow Tala customers to send, receive and hold “stablecoin” cryptocurrencies. The company will make a bold move towards the expansion of Tala’s current account offering and crypto adoption with the newly acquired funds. At present keen focus goes towards adopting crypto at the backend so as to improve Tala’s backend account infrastructure.

The round brought Tala’s total raised to date at $350 million, a valuation of $800 million – fairly similar to its 2019 valuation.  According to Siroya the Serie E approach was preferred as opposed to the traditional venture-led round on account of the expertise Tala stands to gain from Stellar and Upstart. She further revealed that Tala lending volumes are at $60 million monthly and has had over half a million customers access its credit facilities thus far.