The Homeric Power of Advance Directives 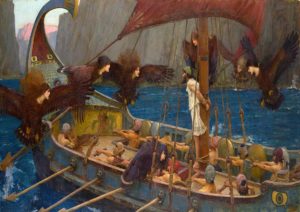 We shouldn’t underestimate Homer’s hold on us. Whether or not we’ve ever read him, he created many of our ruling memes.

I don’t think it’s fanciful (though it might be ambitious) to suggest that he, and the whole heroic ethos, are partly responsible for our uncritical adoption of a model of autonomy which doesn’t do justice to the sort of creatures we really are. That’s a big claim. I can’t justify it here. But one manifestation of that adoption is our exaggerated respect for advance directives – declarations made when one is capacitous about how one would like to be treated if incapacitous, and which are binding if incapacity supervenes if (in English law) the declaration is ‘valid and applicable.’ 1.

I suspect that some of this respect comes from the earliest and most colourful advance directive story ever: Odysseus and the Sirens.

Circe warns Odysseus about the sirens, and how to escape them. She’s very specific about the dangers. The song of the Sirens intoxicates all who hear it. It renders them incapacitous, with calamitous effects:

‘Whoever draws too close, off guard, and catches the Sirens’ voices in the air – no sailing home for him, no wife rising to meet him, no happy children beaming up at their father’s face. The high thrilling song of the Sirens will transfix him, lolling there in their meadow, round them heaps of corpses rotting away, rags of skin shrivelling on their bones….’2

Odysseus, as fully informed as any ethics committee would want him to be, decides that he’d prefer to avoid that fate. He follows Circe’s advice, telling his crew to plug their ears with wax and tie him to the mast so that he (who is going to remain unplugged), can’t jump overboard and swim to destruction. Then comes a very explicit advance directive, stipulating what the crew should do when the Sirens’ song overwhelms him:

‘…if I plead, commanding you to set me free, then lash me faster, rope on pressing rope.’3

What happens is, of course, precisely what Odysseus has anticipated. Odysseus hears the ‘ravishing voices’ of the Sirens and his heart ‘throb[s] to listen longer.’ 4 He ‘signal[s]the crew with frowns to set [him] free’, but they row all the harder, and Perimedes and Eurylochus bind him tighter.5

If the formalities of execution had been complied with, Odysseus’ advance directive would certainly be regarded by an English judge as ‘valid and applicable’, and thus as binding as the ropes that lashed him to the mast.6  Perimedes and Eurylochus would have had a watertight defence to criminal or civil proceedings for assault.

It’s a superb and memorable story – and probably the only advance directive story that most people know. It’s a thoroughgoing endorsement of advance directives. If there had been no directive Odysseus would have rotted in the Sirens’ meadow and Penelope would never have held out against the odious suitors. But it’s misleading. At least in the context of the withdrawal of life-sustaining treatment (where advance directives are most dramatically relevant), it’s unusual to have anticipated the future clinical circumstances and the prognosis and the therapeutic options as accurately as Odysseus anticipated the danger of the Sirens. And, further, we know that when patients are actually facing the situation they so feared, they tend to find that their situation is more bearable than they thought they would.7  That didn’t apply to Odysseus.

Homeric stories are splendid as stories: they are not always helpful as paradigms. We should beware the Siren voices of advance directives.

(1)“Advance decision” means a decision made by a person (“P”), after he has reached 18 and when he has capacity to do so, that if—

(a) at a later time and in such circumstances as he may specify, a specified treatment is proposed to be carried out or continued by a person providing health care for him, and

(b) at that time he lacks capacity to consent to the carrying out or continuation of the treatment,

the specified treatment is not to be carried out or continued.

(2) For the purposes of subsection (1)(a), a decision may be regarded as specifying a treatment or circumstances even though expressed in layman’s terms.

(3) P may withdraw or alter an advance decision at any time when he has capacity to do so.

(4) A withdrawal (including a partial withdrawal) need not be in writing.

(5) An alteration of an advance decision need not be in writing (unless section 25(5) applies in relation to the decision resulting from the alteration).

(b) applicable to the treatment.

(2) An advance decision is not valid if P—

(a) has withdrawn the decision at a time when he had capacity to do so,

(c) has done anything else clearly inconsistent with the advance decision remaining his fixed decision.

(3) An advance decision is not applicable to the treatment in question if at the material time P has capacity to give or refuse consent to it.

(a) that treatment is not the treatment specified in the advance decision,

(b) any circumstances specified in the advance decision are absent, or

(c) there are reasonable grounds for believing that circumstances exist which P did not anticipate at the time of the advance decision and which would have affected his decision had he anticipated them.

(a) the decision is verified by a statement by P to the effect that it is to apply to that treatment even if life is at risk, and

(b) the decision and statement comply with subsection (6).

(6) A decision or statement complies with this subsection only if—

(b) it is signed by P or by another person in P’s presence and by P’s direction,

(c) the signature is made or acknowledged by P in the presence of a witness, and

(d) the witness signs it, or acknowledges his signature, in P’s presence.

(7) The existence of any lasting power of attorney other than one of a description mentioned in subsection (2)(b) does not prevent the advance decision from being regarded as valid and applicable.

(1) If P has made an advance decision which is—

(b) applicable to a treatment,

the decision has effect as if he had made it, and had had capacity to make it, at the time when the question arises whether the treatment should be carried out or continued.

(2) A person does not incur liability for carrying out or continuing the treatment unless, at the time, he is satisfied that an advance decision exists which is valid and applicable to the treatment.

(3) A person does not incur liability for the consequences of withholding or withdrawing a treatment from P if, at the time, he reasonably believes that an advance decision exists which is valid and applicable to the treatment.

(c) is applicable to a treatment.

(5) Nothing in an apparent advance decision stops a person—

(a) providing life-sustaining treatment, or

(b) doing any act he reasonably believes to be necessary to prevent a serious deterioration in P’s condition,

while a decision as respects any relevant issue is sought from the court.

The Morality of Sending Asylum Seekers to Rwanda

Track Thyself? Personal Information Technology and the Ethics of Self-knowledge

How can New Digital Learning Help in Shaping Education

How to identify customer pain points

Cryptos That Could Shine During Q4: Uniglo (GLO), Spookyswap (BOO) And Solana (SOL)