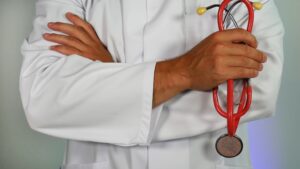 Physicians can actually screw up way more often in their financial lives than others can. The problem is that when physicians blow it, they blow it big.

Today’s Classic is republished from White Coat Investor. You can see the original here.

A physician cannot choose to pay for an undergraduate education at an expensive institution with loans, get married, have two kids, have a stay at home spouse, borrow the entire cost of medical school including living expenses, go into a low-paying pediatric subspecialty, defer the loans during residency and fellowship, then spend 3 years at an academic center before becoming a hospital employee at a non-501(c)(3) in order to spend more time with the kids. Meanwhile buying a fancy physician home in a high cost of living area, get two nice cars on credit, have three more kids during training, put them all in private schools, vacation in Amsterdam, buy a boat, retire early, and choose a high-cost “financial advisor” who sells them lousy investments. It just cannot be done. There’s isn’t enough income to cover all those choices. You might be able to do about a third of them and still be financially successful. Let me show you what that looks like:

That modified plan probably works out fine. You still get to practice the specialty you want. You still get the lifestyle and family you desire. But the numbers work. As a doctor, you don’t get a pass on math.

I don’t know why, but I see this huge divergence in physicians. Really, I could probably divide them up into four segments. These segments, however, aren’t all the same size.

Doctors Who Get It Right

At the top is a group of docs who make all or nearly all of these big financial decisions “right” (in a financially optimal way). This might be 5% of doctors, although it might feel like more if you spend too much time on sites like this one. Maybe this is what their choices look like:

Doctors Who Get It Mostly Right

Next is a much larger group. Perhaps 60% of doctors. They make a few mistakes, but eventually get it figured out and end up very successful.

These docs do just fine. They have nice happy, healthy careers, families, and lives. They pay for their grandkids’ educations and endow chairs at their alma maters.

Doctors Who Get It Right Enough

The third group is surprisingly small. I can’t quite figure out why it is so small. Maybe it is 15% of doctors. These are the ones who get it just right. Barely. They do just enough things right to keep the ship from floundering. Never super successful, but they get everything they really want out of life and still end up without a financial catastrophe.

I think the reason this group is so rare is that it is a very thin razor. Very few people can get it just right. You either fall onto one side of the knife-edge ridge or the other. Let’s take a look at the other side of the ridge.

The fourth group lives on a financial glacier, covered with crevasses with thin snow bridges across them. Their financial life is a veritable minefield. They do a few things right every now and then, but they get the big things wrong. They struggle financially throughout their lives, work harder and longer than they wish, and end up living mostly off Social Security in their short, sad retirements. Maybe one version of this story looks like this:

This sort of scenario is entirely too common. Perhaps 20% or even more of doctors. Look around you. You’ll see them. The details change, but the bottom line is that they made too many financial errors/expensive choices to overcome with their income.

Get as many things right as you can so that you can afford to make your desired “less than financially optimal” choices. Avoid unforced errors. Start early. Fail quickly. Don’t beat yourself up over past mistakes. You don’t have to get them all right to end up very successful. But you do need to get some of them right!

What do you think? Why do we look at all of our choices in isolation and not realize that what we lose in some areas of our lives we must make up in other areas? Comment below!

The post You Can’t Do It ALL Wrong appeared first on Passive Income M.D..